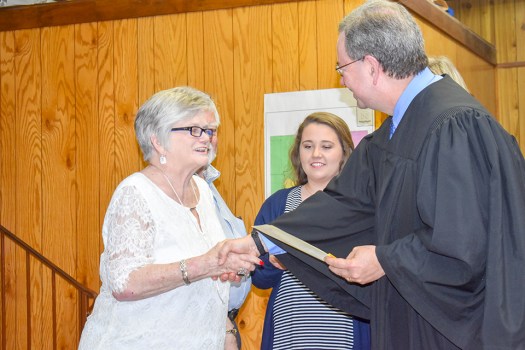 LaFAYETTE — New councilwoman Charlotte Blasingame was sworn into the LaFayette City Council Monday night with her daughter Anjanette Montano, granddaughter Kalee Mott and her husband David Blasingame holding her father’s bible as she took the oath from Judge Calvin Milford.

With Blasingame taking her seat, the LaFayette council is now full. However, before the meeting in a work session, the council learned it’s facing more than a $400,000 deficit in its annual budget, according to LaFayette City Clerk Louis Davidson.

If the council grants all of its department heads requests, Davidson said the council would be short $406,052.33. That number also doesn’t include any costs for the new city hall building or the purchase of an excavator that would be used to tear down homes in the city.

He said the number sounds big, but it’s less than it has been in the past.

“I know the number sounds like a lot, but in about 10 years that is the lowest number we’ve had working on the budget,” Davidson said. “In prior years, we would start off and the budget would be $900,000 to $1 million in the red. It is not insurmountable, but we need to work on it.”

Councilman Neal McCurdy said to be able to make purchases for department heads, there has to be money in the bank.

“How are going to get money in here if you don’t do something?” he asked. “I know a 1 percent sales tax sounds like a lot but it ain’t but one penny. Lanett, Valley, Opelika, Auburn, they got it. Most folks that live here shop down there anyway.”

He said there are some people driving cars in the city that are on the edge of breaking down daily.

Davidson backed up that thought by saying some vehicles are 27 years old. Several of the vehicles are mid-90s models and can’t be listed as surplus because they are still actively being used, he said.

Mayor Barry Moody reminded council members that the reason for Monday’s work session is to see where the council is at. He said there isn’t anybody sitting at the council table that doesn’t want the best equipment for the city’s departments, but it takes work to figure out how to get there.

In October, Moody said the city heard numbers of $800,000, so the cutting that number in half seems like a positive step with half the year still to go. He said if the city continues its progress and gets a few breaks with higher retail sales than projected, it’ll be even closer to a balanced budget.

He said a discussion of a 1 percent sales tax increase is warranted just to see how much revenue it could bring. Additionally, he said that money wouldn’t be a one-year deal, it would generate revenue every year.

Davidson said the city isn’t in a situation where it can just deny all department head requests and then the budget is balanced. He said some departments have watched its requests be denied year after year to balance a budget. Also, the last time a 1 percent sales tax increase was discussed, he said citizens were not in favor.

“We need to go over the budget and cut as much as we can so you can look constituents in the eye and say we did everything we could possibly do, this is where we stand right now. We may or may not still have a shortfall, and if we do, how are we supposed to handle it?” Davidson said. “I think it is extremely important that the citizens know we have tightened our belt as much as possible.”

The council heard from many department heads about their budgets, and Moody said it may be a situation where each department may need to choose its most crucial item.

“We are not just looking at balancing the budget, we are looking at how get the items that are needed,” he said.

Moody said the council wants to do everything it can to provide every service to the public.

“That is why we don’t just look at the budget for 2019 to balance, but at least see what can be done in the coming years to bring more revenue in,” Moody said. “I think we have to open that door for discussion.”