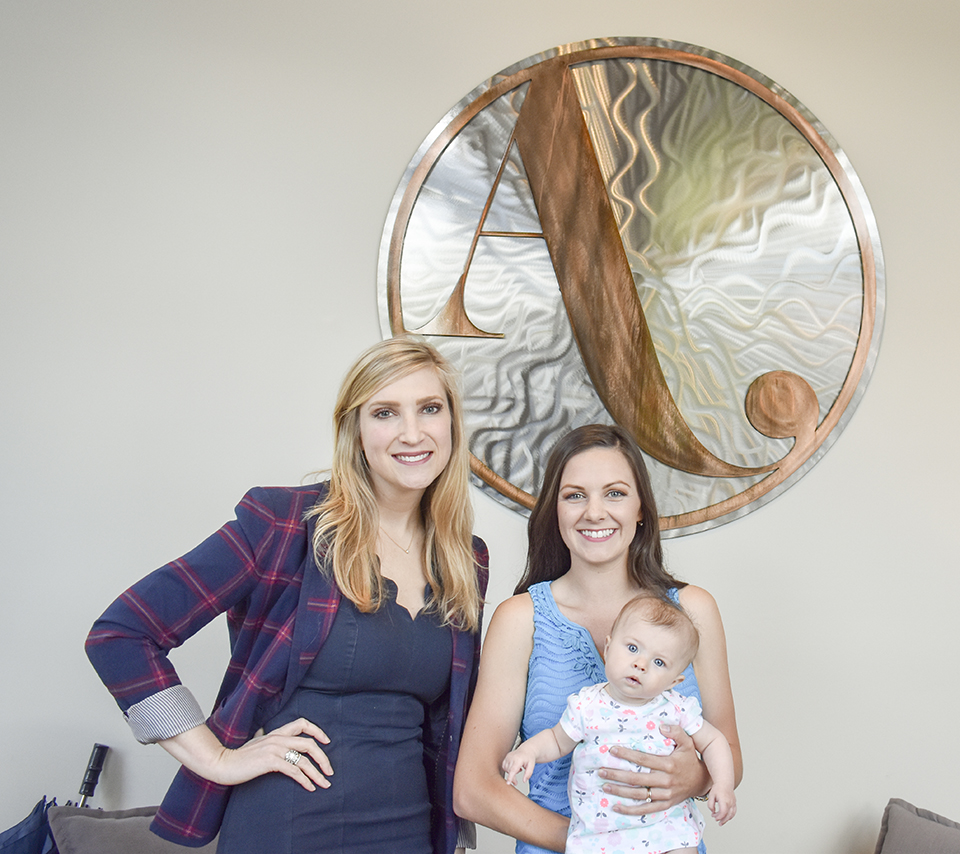 Pictured is Barbi Agricola, owner of Agricola Law in Opelika, left, and Shelbie Hunt, who recently was awarded fund from an insurance agency due to mishandling of a conservatorship in Chambers County. Hunt is holding her 4 month old daughter Amelia.

LANETT — Three years ago, Lanett native Shelbie Hunt was mourning the loss of her grandmother, when she came across a surprising discovery — several bank documents with her name on it.

After a long legal battle, Hunt was awarded an undisclosed amount of money in March due to the mishandling of funds left to her in a conservatorship by her father, who died in 2000. The court case involved the Chambers County Probate Office, Farmers and Merchants Bank and several attorneys.

A conservatorship is a legal concept through which financial affairs for one person are managed by a guardian or protector appointed by a judge.

The account that had been left to Hunt had been closed by the time Hunt discovered its existence in 2016. Her grandmother, who was in charge of the account, had depleted the funds while Hunt was a minor.

Hunt’s father died when she was 4 years old, and the conservatorship was set up in 2001. According to Hunt’s attorney, Barbi Agricola, owner of Agricola Law in Opelika, when a conservatorship is set up for a minor, Alabama law said there has to be a person in charge of that account until the minor reaches 19 years of age.

Agricola said the account was set up properly at the bank, along with a certificate of deposit, and the grandmother was appointed as the conservator, but the account was in Hunt’s name.

In 2016, Hunt reached the age where the funds would be awarded to her, but she told the Valley Times-News Thursday she had no knowledge of the account until after her grandmother passed away that same year.

Once she found the documents, which used her maiden name Shelbie McDougall, she went to the bank to get answers. Hunt said the bank refused to give her any information about the account that was set up in her name because it was already closed and the funds were depleted.

Hunt then went to the probate judge’s office to request documents about the conservatorship and said former probate judge Brandi Easlick told her she would have to request an accounting hearing on the account. Eastlick could not be reached for comment on Friday.

According to court documents, the probate office ordered an accounting of the conservatorship to be produced in June 2017 at a hearing, but because the conservator was deceased at the time, no accounting was done.

At that point, Hunt attempted to hire a lawyer. She said she went to four attorneys in Chambers County, but all refused to represent her. In 2018, she went Agricola Law, which took her case.

Once the law firm was involved, it was discovered the account was not called upon for accounting or inventory from 2001 to 2016. Agricola said under Alabama law, the conservator is required to do annual accounting of any expenditures of the funds to the probate court.

“The burden is on the conservator, but if the conservator does not do it, the burden shifts to the probate’s office to order and ensure that this is done properly,” Agricola said.

The firm also contacted the bank, which at the time said it would provide statements to Hunt for $5 a page. Hunt said purchases made from the account were for everyday expenses from stores such as Family Dollar, Belk’s and Fred’s.

The main office of Farmer’s and Merchant’s Bank in LaFayette declined to comment.

Hunt said she didn’t live with her grandmother, nor was she cared for by her. She also said not a single dollar from the account spent by the grandmother was used to benefit Hunt.

Hunt didn’t disclose the amount of the bond, but said it was enough to make her life easier and send her to college.

Also in 2018, Hunt said she came across a bond with Auto-Owners Insurance Company, based in Montgomery, which was worth the value of the conservatorship. The bond acts as an insurance policy in the event of funds being mishandled by the conservator.  Hunt said she contacted the insurance company and was told it expired when she turned 19 years old. Hunt filed a claim with the insurance company in August 2018.

Just before a claim was filed with the insurance company, Agricola filed a motion to move the matter from the probate office to the Chambers County Circuit Court in Judge Isaac Whorton’s courtroom in July 2018.

In December 2018, Hunt filed a motion to request the insurance agency pay the full amount of the bond because of the misuse of funds by Hunt’s grandmother while in charge of the conservatorship.

Agricola said from Hunt’s standpoint, the case is over, but the lack of accounting and inventory from the probate’s office in this case could mean there are potentially other cases with similar stories.

Agricola said it is possible the insurance company could have an action against the county regarding this matter, but she has no knowledge if the company is doing so.

From 2001 to 2018, John Crowder, Cary Baldwin and Easlick served as probate judge in Chambers County. Current Probate Judge Paul Story was elected in November 2018 and assumed the office in January 2019.

Hunt said Thursday that Chambers County is her home, and she was astounded by the negligence shown by the probate office.

“There needs to be a level of accountability and trust with those elected positions of power,” she said. “It is our job as citizens of this county to conduct oversight of these powers to even that scale of justice.”

Hunt said it is the job of the law to protect the people, and it was probate judge’s job to help her, even if the previous administrations didn’t do their jobs correctly.

“Once you are elected into that position, you need to make the difference,” she said. “Elected officials should show diligence and presence, not negligence and self-indulgence.”

Story said he wouldn’t comment on the actions of past judges or how they operated the office, but he did say when a conservatorship is set up, there is supposed to be a measure of accountability on that account.

He said when a conservator is first set up, there is supposed to be legal counsel for the conservator and the ward, or person the account is for. He also said there is supposed to be inventory and accounting done of the account within the first 60 to 90 days. After that period, Story said another round of accounting is required a year afterward. After the first year, he said accounting is required no more than at least once every three years. He said the judge has the discretion to order accounting every year or every three years, depending on the history on the conservator.

If accounting does occur and the probate judge does see a problem, the office conveys those issues to the lawyer of the conservator and the ward. If the ward has a lawyer, that person can petition to have the conservator removed.

He said if there is no follow up after the conservatorship is set up, the probate office would never know of any improprieties occurring.

“We can’t force them,” Story said. “We only have certain legal ability that we can use to get the inventory and accounting.”

Hunt, who is now married and a mother to a four-month-old daughter, Amelia, said she was very close to her grandmother while she was alive, which made the knowledge of her actions even harder. She said the money she was awarded in March doesn’t change how she remembers her.

“At the end of the day, it is hard knowing my own grandmother did that to me,” she said. “But no amount of money will ever get her and my father back here.”