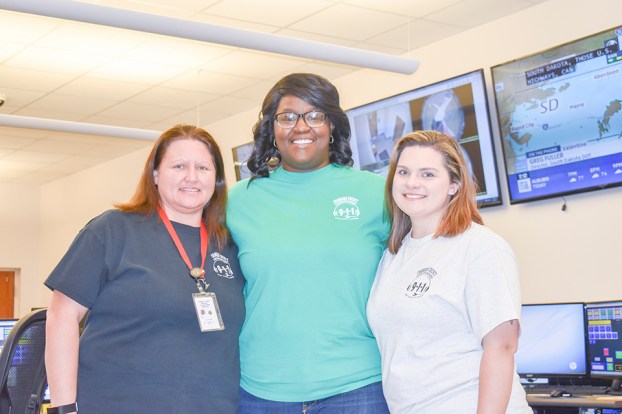 Nora Lynn Murphy, left, LaTosha Darden, middle, and Lauren Hughes, right, are just some of the faces on the other side of the phone when Chambers County residents are facing some of their most traumatic events. --Dustin Duncan

LANETT — When an emergency call comes into the Chambers County 911 line, the telecommunicators on the other end of the phone have no clue what’s about to happen.

For example, Lauren Hughes has been a telecommunicator for about a year, with training as a police officer and correctional officer, but none of those experiences trained her for a distressed parent calling 911 because her 4-day-old baby was choking.

Hughes said she knew she needed to remain calm, even as the human element of empathy set in. While talking with the worried parent, Hughes attempted to reassure them that help was on the way, while dispatching emergency services to the residence.

Hughes said as long as she continued to hear the baby cry, she knew there was still a chance for survival. Eventually, she heard the sirens on the other end of the phone, and she was able to relax.

“When I heard the ambulance on the parent’s phone, I was able to take a deep breath,” she said. “It was the longest two minutes of my life.”

Hughes said she knew she had to stay calm for the mother to remain calm, but on the inside, she was a wreck.

“I’m the voice that they hear, so they need me to stay calm,” she said.

April 14 through April 20 kicks off National Telecommunicators Week, which was started in 1981 by Patricia Anderson of the Contra Costa County Sheriff’s Office in California.

In Chambers County, the 911 office, located on Highway 50 in Lanett, received 97,302 calls in 2018 and has a staff of 17 telecommunicators. The office takes calls for all forms of public safety in the county, including fire, police and emergency.

Darlene Billingsley, communications supervisor at Chambers County 911, started her career in 1985, and has missed many birthdays, holidays and other important events to be the first voice people hear when traumatic events occur.

When a person calls 911, a telecommunicator picks it up and immediately goes to work accessing the situation. While that dispatcher is on the phone, another telecommunicator in the office can listen in and relay information to officers or paramedics before getting to the scene.

Hughes said telecommunicators try to give those responding to the scene as much information about what is going on as possible within seconds of receiving the call. It’s also important to let first responders know about the state of the caller, so they can prepare for it. However, for dispatchers, the second they pick up the phone, there is no preparation.

“You never know what you are going to get when you answer the phone,” Hughes said. “You have to jump to in.”

LaTosha Darden, a 22-year veteran of the Chambers County 911 office, said every day on the job is different. Some days consist of several traffic stops and checking license plate information and others are stressful call after stressful call.

She said leaning on her co-workers is essential when dealing with calls that result in death or severe injuries.

“I just try to take a deep breath,” Darden said. “We work well together because we have good co-workers. You also have to keep going because the next call is coming.”

A few years ago, Darden said her first call of the day was a man committing suicide by a gunshot while she was on the phone. She said it took her a second to comprehend what just happened.

Darden walked outside to collect her thoughts, took a few deep breaths and went back to her desk to continue receiving calls.

“You just have to bounce back and keep moving,” she said.

Nora Murphy, a nine-year employee of Chambers County 911, said her co-workers are the only ones she can talk to about what happens throughout the day.

“What better person to understand what somebody is going through than the person doing the same thing,” she said.

Murphy said she isn’t a robot when talking to her callers. She’s cried, listened and begged for the person on the other end to pull through. Once it’s over, she takes a few moments for herself and comes to back to her fellow telecommunicators and talks about it.

“I might take it home a little bit because we can’t talk to our families about what happened,” she said. “If I ever need to talk one of my co-workers, they are there to listen.”

One of her toughest moments was receiving a call about a suicidal person that was called in by someone else.  She said the incident was very close to the 911 building and emergency personnel were still far away.

She said the building of the incident was locked down and nobody could get in or out, so she told the caller to pick up a chair and shatter the window, which is how officers entered the building to remedy the situation.

Although, Murphy said she deals with the situations at the moment, then moves on to the next call, it doesn’t mean she doesn’t think about the victims. She said there was a man who was stabbed six years ago who she called to check in on later. She learned he was able to walk again.

“That was six years ago, and I’ve never met him, but I still think about it,” Murphy said. “He told me my voice was his guardian angel.”

The key to getting through the tough situations as a telecommunicator is to remain calm at the moment but not being afraid to confide in co-workers, Murphy said.

“If you hold it in and not talk about it, you may not come back in the next day,” she said.

Lanett Patrol Captain Richard Casner said in some respects, dispatchers have harder jobs than the men and women they are sending to incidents.

“They get to hear the scary things that happen over the phone and can’t do anything about it,” he said. “They are sending guys they know very well into a situation they have no control over.”

He said when the radio traffic goes off, telecommunicators have no idea what is happening at the scene until a police officer responds to them.

Casner said the men and woman at the Chambers County 911 command center are highly-trained and very good at their job and he considers many of them as friends.

“I have so much respect for our dispatchers,” he said. “I don’t have the words to describe how important they are to our jobs.”

Chambers County Sheriff’s Department Lt. C.T. High said communication between officer and telecommunicator is one of the most important aspects of the job.

“They have to be able to take vital information before they dispatch,” he said. “Our safety is dependent on the information they have.”

He said if an officer doesn’t respond to the dispatch center after heading into a dangerous situation or starts screaming and doesn’t explain to the telecommunicator about why it’s happening, those on the other end of the radio will speak up and check on the officer.

“They are our lifeline,” High said.