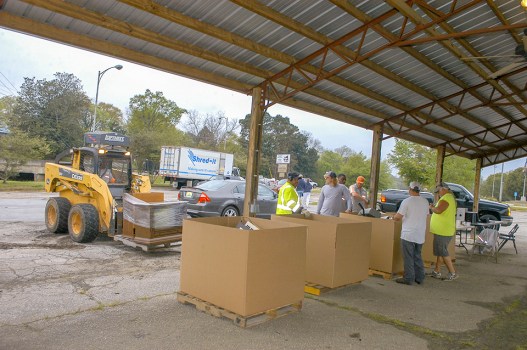 Mayor Pro Tem Marquetta Madden, filling in for the vacationing Mayor Leonard Riley, said that a group of around 25 people met at city hall Saturday morning and went out to clean up litter from some designated streets. She and Councilman Jim Clark were among them.

Suellen Showden must have had a dozen people in her group,” Madden said. “Our talking about cleaning up the community must be making a difference. The streets where we picked up litter weren’t as littered as they were in past years.”

“Suellen Snowden is a really dedicated person,” Councilwoman Cassie Carlisle said. “She had a big group with her for Saturday’s pickup. We want to thank everyone who turned out.”

Public Works Director Patrick Bolt said that there was good participation in the electronic recycling part of clean-up day.

“We filled a 53-foot tractor trailer with electronic items,” he said. “The county had previously filled two trailers. The shredder guy was overwhelmed at the response. He said that if he had known he would have gotten that big of a turnout he would have brought a bigger truck.”

Bolt said that more than 260 old tires were brought to the Farmer’s Market Pavilion pickup site. “Mr. Greenjeans has picked up a lot of curbside debris over the last week,” Bolt said.

These pickups will continue for one more week.

“I want to thank everybody for coming out and helping us on Saturday,” Clark said.

Councilman Randall Maddux thanked East Alabama Fire Department’s swift water rescue team for their response in a recent boating accident on the Chattahoochee River near Langdale Dam. One person lost their life in that incident, but others were saved thanks to the efforts of rescuers.

Valley Parks and Recreation Director Laurie Blount thanked citizens for their participation on cleanup day and added that baseball and softball games will be played this week.

“Our pool project has hit a few bumps, but we’re coming along with it,” she said. “The Poolpak will be arriving on Wednesday. It will a big piece of equipment, and we’ll be installing it soon.”

Valley Parks and Recreation will be hosting a track meet at Ram Stadium on Saturday, April 27. Track teams from six different cities will be participating.

Jessica Yeager, who recently succeeded Donnie Smith as the county 911 director spoke to the council. She’s been with the county since 2006, starting off as a dispatcher and working her way up to operations manager before succeeding Smith on his retirement.

Yeager said that she’s a big advocate for community outreach and would like to have 9-1-1 staff and equipment at public events to answer questions anyone might have.

The council approved another resolution to award a badge and service weapon to retiring police officer Frank Montroy, who has been with Valley Police Department for multiple years.

The council suspended the rules and adopted on a first reading an amendment to the city’s zoning ordinance that would reduce from 20 days to 14 days to appeal code violations. This makes the city complaint with the International Building Codes.

The council called for a public hearing on May 13 to discuss the possible rezoning of four properties in the city. One request on Fob James Drive across from AuburnBank would change present zoning from C-3 & R-2 to R-3. Property at 6601 20th Avenue across from Langdale Cemetery could go from R-2 to C-2. The Triangle Service Station site on Highway 29 on the city’s south side, could go from RR to C-2. Two lots behind Capital City Bank on 35th Street could go from Office to R-2.