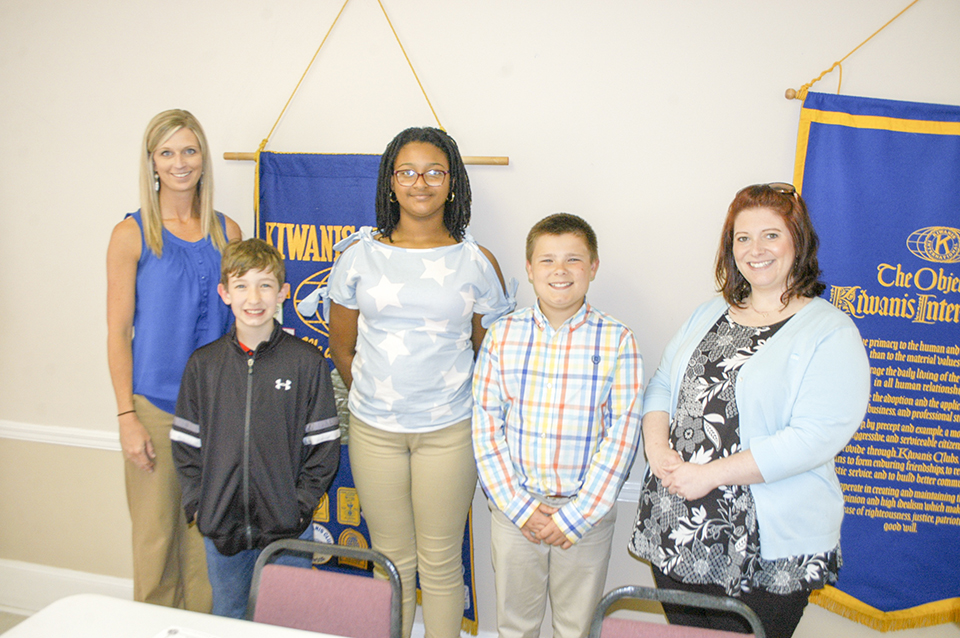 VALLEY — On Wednesday, the Kiwanis Club of Valley received a visit from three of the five winners in this year’s “Amazing Shake” event.

Inspired by the Ron Clark Academy, the Amazing Shake offers fifth and sixth grade students in the Chambers County School District to be assertive, to have self-confidence and to develop public speaking skills. These soft skills are exemplified by the amazing impression the young students make when shaking someone’s hand.

The students were accompanied by Lauren Dabbs, a fourth grade teacher at Fairfax who’s a big booster of the Amazing Shake program. She’s been to the Ron Clark Academy three times and greatly admires the approach they have toward education.

“Their students are confident and assertive,” Dabbs said. “They demonstrate skills we don’t always see and know how to fit into a curriculum.”

The Ron Clark Academy is a nonprofit middle school housed in a red brick building that once served as a warehouse in downtown Atlanta. Founded by Clark and Kim Bearden in 2007, the school has students from fifth through eighth grades from a wide range of economic backgrounds.

On Oct. 31, 2008, students from the Ron Clark Academy were named the ABC Person of the Week by ANC World News Tonight. In January 2019, the school produced a music video in collaboration with rapper Ludacris and Mercedes-Benz, one of the school’s donors. It was a promotional video for Super Bowl LIII, which was held in Atlanta. The video highlighted notable locations and businesses in the Atlanta area.

“They took an old building and transformed it into a Harry Potter-type world,” Dabbs said.

Dabbs said middle school-age students need to learn the kinds of skills that can lead to success in life. There’s a skill in learning the right kind of handshake. One could call it the goldilocks grip — not too hard and not too soft, just right.

This year’s Chambers County Amazing Shake had 34 fifth and sixth grade contestants. Each school sets the expectations they have of their students before they advance to county-wide competition.

Some schools had mock competitions and others had etiquette class. Round one stressed the basics, and round two was a good bit tougher with the contestants being on stage and asked questions by a panel of judges. They could address that question in a talk that could let from three to five minutes.

“They are under pressure at this stage, and that’s when you start to see separation,” said Dabbs. “Some kids just have a way of being at their best under pressure.”

The second round narrowed the contestants to a final five. These students advanced to interviews by the central office staff.

“The third round was very challenging to hold up and do well,” Si’Nora Grier said. “Dr. Hodge, our superintendent, was in there.”

Dabbs said she was hopeful the competition would expand beyond fifth and sixth grade to include grades 4-8.

“Our ultimate goal is to compete in the national competition at the Ron Clark Academy,” she said.

One reward of making the top five is that each student will have the opportunity to serve as a CCSD ambassador next school year.

“They will greet people and shake lots of hands at all kinds of events,” Dabbs said.

The students were given a chance to answer some impromptu questions. When asked if modern technology had both good and bad points, Parker Williams said that it did.

“You can communicate with people who live far away from you,” he said. “I have a cousin in California, and we play Fortnight a lot.”

The downside is that it can put harmful thoughts in someone’s mind.

“It can put thoughts in people’s minds that it’s OK to hurt people,” said Eli Whorton. “It can really mess you up if you think that way, and that’s not good.”

“It’s been a good learning experience for them,” she said. “They can go back to their classroom and talk about what they’ve learned.”

“I’m sure this has been a good experience for you,” said club member Patsy McKenzie. “I’m sure each of you was glad you were chosen.”

Each of the students nodded in agreement with that.