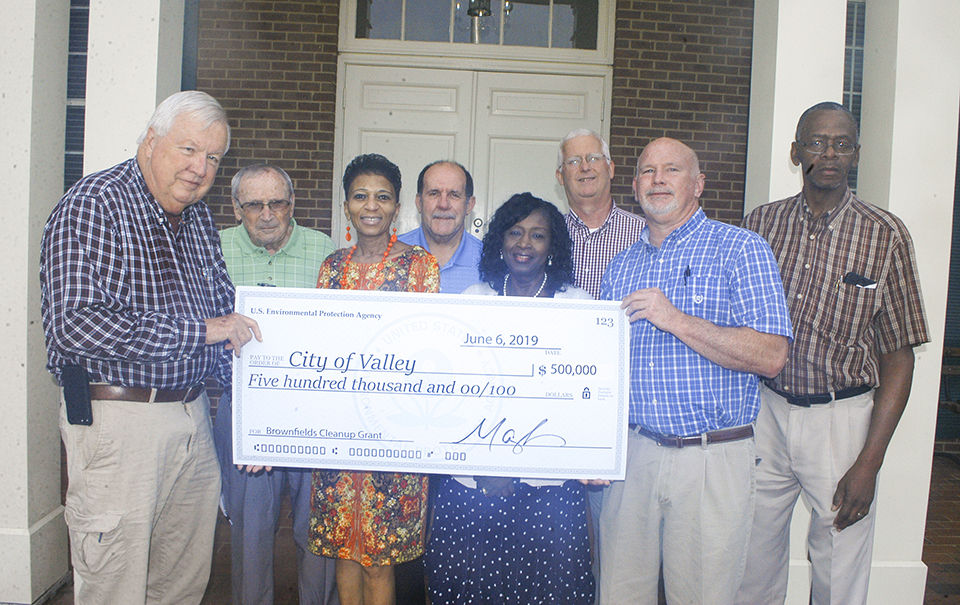 VALLEY — Prior to Monday evening’s regular council session, the Valley City Council hosted a public hearing to discuss a $500,000 Brownfields grant that has been approved for the city.

The grant is targeted for the cleanup of the Fairfax Mill site, which the city owns. This Community Development Block Grant (CDBG) comes from $21 million budget that’s approved for the state by the federal government. CDBG funds can be used for a variety of purposes, including the cleanup of mill sites.

“Some residents of the area have expressed their concerns about the mill site, in its present condition, being a potentially dangerous place for children,” Jones said. “I’m extremely pleased about this grant and that it will help us clean up that site.”

Carter said that soil testing would have to take place there.

“We hope to get something going very soon,” he said.

The CV Railway grant has allowed for the replacement of some benches, fencing and signage along the popular walking/biking trail. Later on this year, the seven-mile trail from Shawmut to River View will be resurfaced.

The grant funds for the John Soules Foods project will enable the Tyler, Texas-based company to open a plant in Valley by the fourth quarter of 2020. In full production, the plant will have three lines and more than 500 employees.

John Soules products are distributed throughout the U.S. and include whole, strips, diced and pulled beef and chicken to fully cooked breaded chicken. The company is the No. 1 producer of beef and chicken fajitas in the U.S.

In addition to its headquarters in Texas, the company also has a production facility in Gainesville. The Valley location will be on Towel Avenue in the former distribution center for WestPoint Home.

The grant funding will allow for a new lift station to be located south of the plant along with some new sewer lines. The plant will be making most of its discharges during the late-night hours.

In his report to the council, Police Chief Tommy Weldon said that this year’s Junior Police Academy will be getting under way at Valley Community Center on Monday, June 17. Approximately 45 youngsters have far signed up so for the week-long event and that number could go up to around 60 for this very popular summer program. Weldon said that the police department has received more than 20 applications for two VPD vacancies due to recent retirements.

Valley Parks and Recreation Director Laurie Blount said that a swim meet took place this past Saturday at the Community Center pool.

“We got most of it in,” she said. “We missed the final five heats due to the lightning. The fields at the Sportsplex are in good shape despite all the rain. Five years ago, we couldn’t have played after that kind of rain. The playing surface is much better than it used to be.”

Those playing fields underwent a $2.4 million upgrade several years ago. Those improvements have made a big difference in Valley being able to host tournaments. The 9 & 10-year-old district tournament will be taking place there this weekend and will continue through next week. Adult league play will be getting under way late this month at the Sportsplex.

“Everyone’s welcome to come out and watch,” Blount said.

Blount said that the Valley Farmers Market has been getting good turnouts over the past two Fridays.

“We had eight vendors there last Friday despite the rain,” Blount said. “We had good crowds before and after the rain. The pavilion was a good place to be when the rain was coming down.”

Council Member Jim Clark thanked Valley Parks and Recreation on having done a good job in hosting a recent session of the District Masters Games. He also asked the Public Works Department to check on some stopped-up drains along the streets in Shawmut.

“It helped keep debris out of people’s yards in the recent rains we had,” he said.

The council sold some property it had previously taken in condemnation actions. City Attorney John Ben Jones read three ordinances selling lots in Langdale, at 6601 20th Avenue and on 22nd Avenue. The council suspended the rules and adopted the ordinances on a first reading. Gil and Nancy Maples purchased a lot on the Langdale mill village for $2,500. David Thompson bought the land on 20th Avenue for $1,200 and Jossie A. Valles Vargas purchased the site on 22nd Avenue for $500.