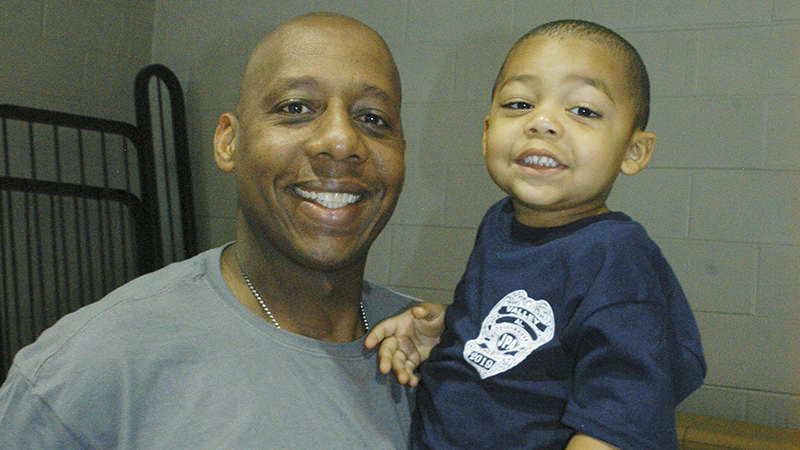 Two-year-old Lawrence Howell Jr. was the youngest child to graduate from this year’s Junior Police Academy. He received a certificate along with 74 other youngsters who took part in this year’s program. His dad, Lawrence Sr., taught one of the sessions, showing the children how drug dog Goose could sniff out illegal drugs. --Wayne Clark

VALLEY — Valley Police Department’s annual Junior Police Academy took place this week. A total of 75 children took part in it, and they learned a great deal about what police officers do on a daily basis. At 10 a.m. on Friday, parents, grandparents and other family members gathered inside Valley Community Center’s Community Room to witness a graduation ceremony where the elementary school age children who completed the program received certificates.

Several of the youngsters spoke to the big crowd gathered at the ceremony. Tera Lowery said it had been most interesting to hear how police officers investigated crime scenes and gathered important evidence such as fingerprints. Taylen Barnes said it had been fun for Chambers County Chief Deputy Richard Carter to talk to them about the Sheriff’s Office helicopter and how it helped them in their work. Bailee Walker told the crowd she had taken to heart what juvenile probation officer Larry Billingslea had told them about how important it was for them to make responsible decisions and to be a good citizen. Sawyer Moore said that he’d really enjoyed watching Officer Lawrence Howell show them what drug dog Goose could do. Timothy Whitehead said that everyone had a good time going to the East Alabama Fire Department and having the EAFD firefighters talk about their work and to get close to the big fire trucks. The children thanked Frank and Jackie Hartley of American Legion Post 67 and the Legion Auxiliary for presenting them a U.S. flag.

Chambers County Director of Secondary Schools Dr. Sharon Weldon told the big group of youngsters that they could learn five important lessons about life from the five fingers on their hand.

“Your little pinky is the smallest finger, but it’s responsible for 50 percent of your hand strength. It’s small, but just remember that there’s no size, position or voice too small to have influence.”

The ring finger, she said, is where husbands and wives wear wedding bands.

“It reminds you to be kind,” she said. “The Bible tells the importance of love. Be kind to your enemies, use strength for good and be kind.”

The middle finger can be used to make bad gestures but it’s important for balance and individuality.

The pointer finger can be the most powerful one of all. “It represents leadership,” Weldon said. “Every one of us can do two things. We can either lead or be led. Lead or be led to do the right thing. You don’t have to be like everyone else. Be strong, be kind, be true to yourself and lead or be led for good.”

Weldon said the thumb is the one that can most easily touch every other finger.

“It represents determination and will power,” she said. “Always be committed and dedicated,” she said. “Do what you need to do and always choose to do the right thing, not the easy thing. Stay committed this way no matter how difficult things can be. Congratulations, graduates, and remember that these five things can take you anywhere you want to go.”