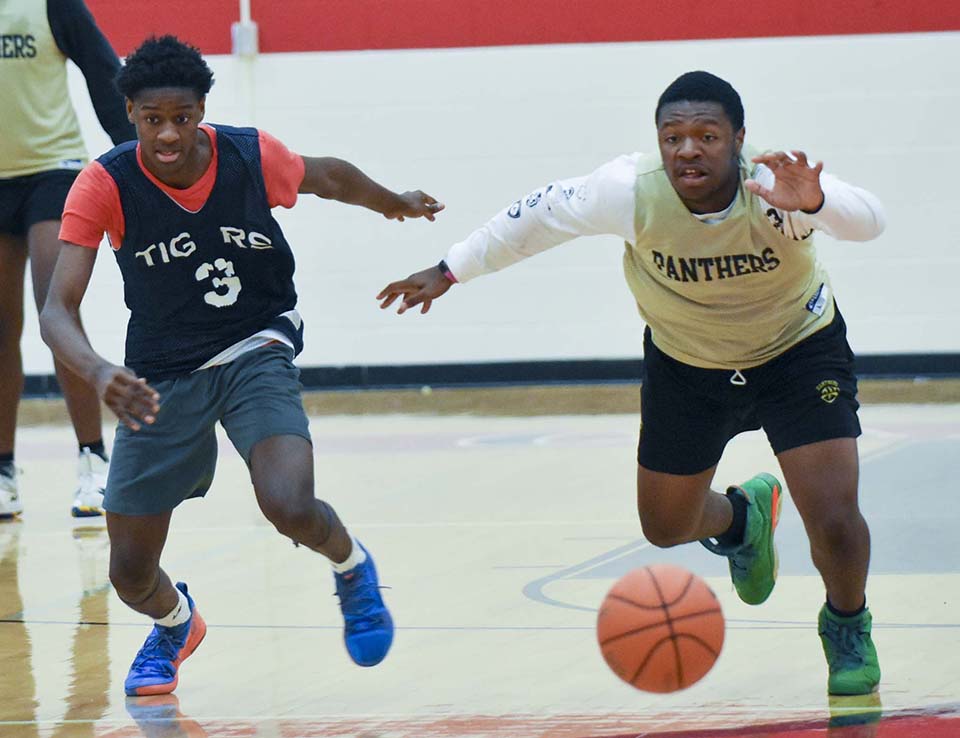 The Panthers lost the first matchup of the day 47-35 to Troup County High School.

“I  think we did well, especially coming off of football practice this morning,” Lanett boys assistant basketball coach Trentavious McCants said. “The only thing is at the beginning of the game we were missing too many layups. In the first half, we missed about 22 points in layups, but it’s alright. We’ll get better inside.”

Lanett returns its size that the program is known for this year with seniors Cameron and Zameron Boozer. The Panthers are also still opening games with lots of running as the team got up many attempts near the rim to begin Thursday’s contest. Senior B.J. Smith checked into the game earlier and got a couple of quick buckets under the basket shortly after.

“You see inside we have 6-foot-9, 6-foot-8, 6-foot-7 [players],” McCants said. “We’re going to be doing the same thing we have for the last four seasons of playing inside-out. We have to work on our outside shooting, and we have to make layups at the beginning. I think we’ll be alright, especially with our guards. We have some young guys, too. When they get comfortable and will be able to knock down the outside shot, we’ll be alright.”

A new face on the varsity squad checked in at the 8:45 mark in the first half for the Panthers. Six-foot-three sophomore Caden Story came into the game as a new frontcourt option for Lanett.

The Panthers soon began to press when the Tigers increased their lead to 17-8.

The press gave Lanett the leeway to make a quick six-point run, highlighted by Story’s back-to-back buckets on the block.

“He’s going to be one of the big guys to help us this year,” McCants said of Story. “Him, the [Boozer] twins and B.J. Smith. With Caden right now, he has to get his wind and legs under him because he’s not used to the fast-paced game that we’re running right now. Once he learns the offense and gets down his defensive principles with the help side and the hedging hard, he’s going to help us out a lot.”

Lanett cut Troup County’s lead to three at the half before the Tigers pulled away by double digits again early in the second half when the Panthers’ starters were resting. Some of Lanett’s reserves who got into the game in the early second half include new Wadley transfer and senior Kadarius Zachery. Troup County was led by senior forward Camren Oneal, who got it going down low and from three-point range offensively.

Lanett’s starters checked back in at the 8-minute mark of the second half, and cut down the lead to six with 4:20 remaining. The Panthers last comeback attempt effort was led by point guard Larontavious Hurston, but Lanett ultimately couldn’t give one more push in the contest. McCants said that he wasn’t too worried about the team’s performance because many of the athletes came straight to Callaway from football warm-ups.

The Panthers also lost their second game of the day. Lanett is one of the teams expected to participate in next Thursday’s play date at Valley High School. The Panthers will face Smiths Station and crosstown rival LaFayette at the play date.