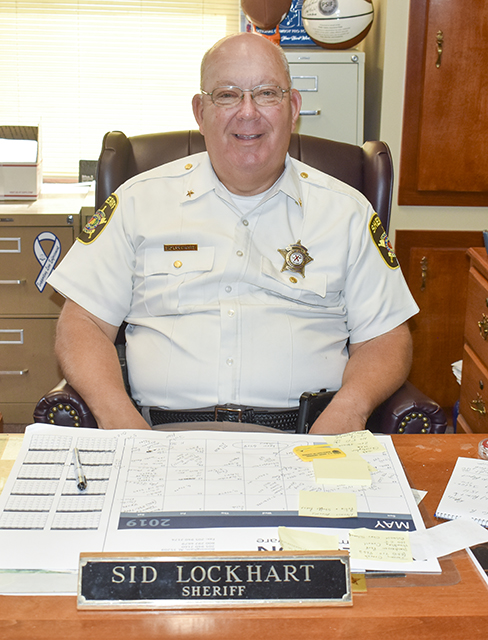 Through a program called “Stepping Up,” the county commission will establish a group to examine more ways to help inmates with mental health problems while incarcerated. The commission passed a resolution this past week, following suit with several other Alabama counties.

Lockhart said the program is needed because the sheriff’s office is limited in what it can do once charges are filed.

“The only thing we can do is put them in jail,” he said. “It is sad, but they have closed down so many mental health facilities over the years, and we have so many who need mental health treatment. I think this is a good step.”

Lockhart said after an inmate is booked, they are sent to East Alabama Mental Health, which prescribes medications to inmates. However, this process doesn’t happen immediately, and he said it can take a few days for a person to see a doctor. This results in individuals being off their medication for several days, which can cause problems.

Lockhart said an inmate booked for a non-violent offense with a mental health problem can quickly turn into a violent offender without medication.

“We are not trained to handle those situations like a hospital would be,” he said. “We are just not equipped to handle it best way it needs to be handled.”

Lockhart described an incident recently where a woman who was off her medication locked herself in a room with a pair of scissors and threatened to stab anyone who walked into the room. Notwithstanding the fact the woman had a weapon, officers also feared she would hurt herself. Lockhart said the woman was subdued but if she was taking her medication, the incident might not have happened.

Based on a resolution that established the group tasked with looking at mental health issues in jails, rates of serious mental illnesses in jails are three to six times higher than for the general population.

County Commissioner Debra Riley, who is taking the lead on the county’s end to establish a study in Chambers County, said almost three-quarters of adults with serious mental illnesses in jails have co-occurring substance use disorders.

“Adults with mental illnesses tend to stay longer in jail and upon release are at a higher risk of recidivism than people without these disorders,” she said.

Riley said the program asks the court system to take a look at everybody booked into the county jail and ask them a few assessment questions. From there, East Alabama Mental Health will send somebody to the jail to review the assessments to see if those individual people can get better services. Riley said part of those services may be going to Probate Judge Paul Story or Circuit Judge Calvin Milford and asking for an inmate’s release to get them the appropriate help.

Riley said not everybody will qualify for the program, especially if they are a danger to society.

“We are talking about individuals who are safe in the community,” she said.

Riley said the minute somebody is booked at the county jail, they lose their treatment options, even before they are convicted. Even when they are released, she said patients have to restart the process of getting medicine and sometimes spend months without it.

“We are trying to bridge the gap between those times,” Riley said.

The county will make up a team from multiple agencies that safely reduces the number of people with mental illnesses in jails.

A team will also collect and review numbers to assess needs while identifying individuals entering the jail system with mental illnesses and their recidivism risk. The team will use that information to guide decision making with the jail system.

The county will also be tasked with examining treatment options and determining what programs and services are available to those in the county with mental illnesses while identifying barriers on getting such treatment.