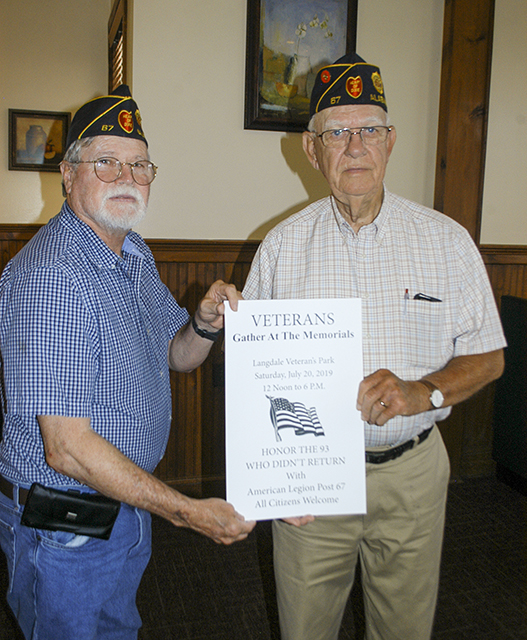 VALLEY — On Tuesday evening, American Legion Post 67 finalized plans for two special events they will be hosting this month. On Saturday, July 20 they will be having a Gathering at the Memorials in Veterans Park. On the following Saturday, they will play host to the annual Day for the Veteran at Valley Community Center.

“Less than one-half of one percent of our population is on active duty in the military,” said Post Commander Lanny Bledsoe. “Many people today aren’t aware of the sacrifices made by young men who grew up in the Valley, went off to war and didn’t make it back home. Those who have served our country played a big part in making our country what it is. On Saturday, July 20 we want people to come to Veterans Memorial Park, look at the names on the memorials and perhaps learn things you may not be aware of.”

Valley Parks and Recreation will have some tents set up in the park that day, and the Legion Auxiliary will have lots of tiny U.S. flags lining the park.

“We will be honoring those who didn’t return,” Bledsoe said. “We’re inviting everyone to come by. We will have ice, cups and cold drinks for everyone. There’s a special invitation for veterans, especially younger ones, to come out and be with us. We will be there from noon till 6 p.m. on Saturday, July 20.”

The younger veterans will be invited to attend the following Saturday’s Day for the Veteran program at the Community Center. This will be taking place in the Bobby Crowder Room from 9 a.m. till 2 p.m. EDT. “It will be a good idea for veterans to have their DD-214 form with them. This will help people from Veterans Affairs look up their service record.”

The goal for A Day for the Veteran is to inform local veterans of possible benefits they have earned through their service but may not be aware of. Sam Cofield will be there to talk about the Vet to Vet support group he’s with. A combat veteran of the Vietnam War, Cofield is well aware of the kinds of problems his fellow veterans contend with. Vet to Vet provides a means of talking it out and sharing it with other men who are going through the same thing. All meetings are confidential.

Bledsoe said he’s well pleased with the way things have gone in previous Days for the Veteran. “We’ve had good turnouts,” he said. “We appreciate it when the veterans who came out tell us they think it helped them. We will have coolers on hand with ice and refreshments for the veterans who come out. We think this is serving a good purpose.”

July 20th will be the first time Post 67 has hosted a Gathering at the Memorials. Bledsoe said there’a big difference in the way things were when he was growing up and the way things are now. “I was five years old when World War II started and nine when it ended,” he said. “River View was a small community, but the war affected everybody every day. We had over 120 men from River View in active service. All the men were gone. Everybody in the town was concerned about them and looked forward to any news they could get about them. On the home front goods were rationed. People didn’t like it but knew it was necessary and didn’t complain.”

There are four monuments in Veterans Park containing the names of local men who died in WW II, Korea, Vietnam and Afghanistan/Iraq. A total of 72 of the 93 names are from WW II.

“We are hoping for another good turnout on July 27 for this year’s Day for the Veteran,” Bledsoe said. “We usually get around 75 veterans to come out.  We try to make it a speedy process to talk to people who can help them. We want them to feel it was worthwhile for them to have been there.”