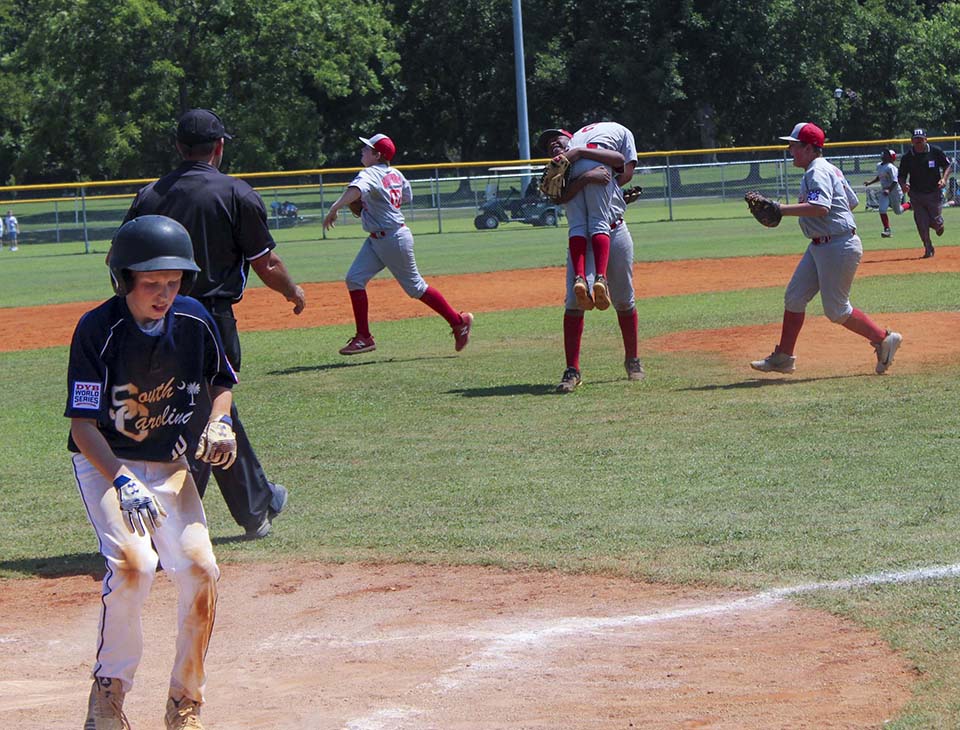 The game didn’t disappoint as supporters and coaches from both sides left Field 5 at Ray Pennington Athletic Complex with an intangible keepsake, having witnessed the longest game in the short history of the inaugural tournament.

Alabama manager Marc Gooden was still in a state of shock just moments after watching his club break a longstanding tie with a rally in the seventh inning to pace the 5-2 victory.

“It was nerve-wracking. There’s just no (other) way to explain it,” said a tense Gooden

“Our kids hit the ball when it was time and that’s the only thing we could do. And we had the outs when we had to make them.”

With the win, Alabama faces Mississippi at 12:45 p.m. on Tuesday needing just two more wins to claim the Majors title. South Carolina drops to the loser’s bracket to play Virginia in a win-or-go-home scenario at 10:30 a.m.

An evenly played contest throughout, both teams finished with five hits and the score was deadlocked at 1 through the bottom of the sixth inning.

In the top of seventh, Alabama’s Tyler Garrett had his only hit in the biggest moment of the game. His bases-clearing double brought in three runs to give the group a 4-1 lead.

Gooden has already seen Garrett crank a home run well outside the park earlier in the tournament, so the stand-up double in a clutch spot wasn’t a surprise.

“He crushes the ball when he hits it. He’s just got so much power,” Gooden said of Garrett.

Alabama’s Jordan Johnson, Dylan Adcox, and Jay Burns all came across the plate in the seventh to make the score 5-1.

Though coming through with a rally-igniting hit in the game-deciding inning, Burns did most of his damage on the bump. He pitched 3 1/3 innings, giving up just one hit and no earned runs.

When Burns was replaced by Cam Heard in the bottom of the fourth, South Carolina’s Miles Trussell responded with his only hit, an RBI double that tied the score at 1-all.

Heard was able to hold the South Carolina bats quiet for the majority of the next three innings, only surrendering one run in the bottom of the seventh on a Jamison Rogers RBI.

Gooden says he was going to switch pitchers to preserve Heard’s pitch count total but decided to sacrifice his services for tomorrow’s game to get the final three outs.

Brock Bell added a hit in the win for Alabama.