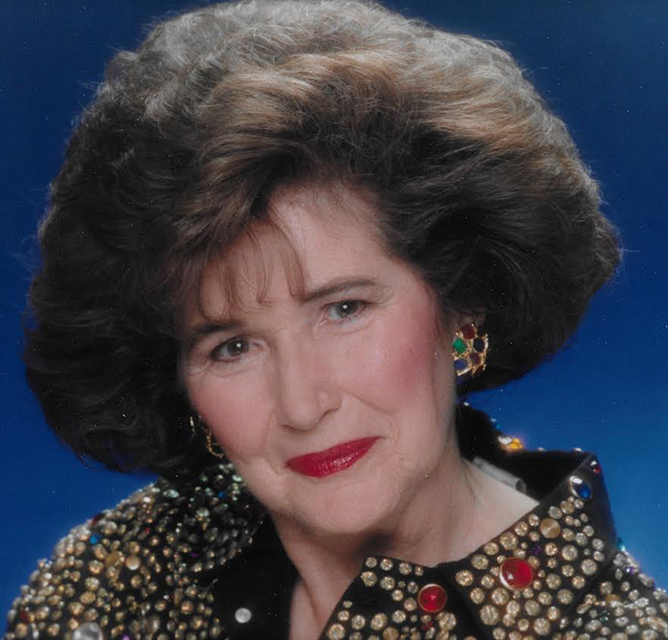 Virginia Boyt was born in Molena, Georgia, on July 27, 1930, the second of three children born to Robert Lafit and Julia Edwards Boyt. She was a very proud 1947 graduate of R.E. Lee High School in Thomaston Georgia.

Shortly after her graduation WWII veteran Marion Alfred Fallin invited her on a date to a nearby car race. Their ensuing romance led to their marriage on Oct. 4, 1947, in Thomaston, where they worked in the local mills and started their family with the birth of daughter Sandra in 1949. In 1954, they moved to Lanett where they purchased and operated a business, Quality Dry Cleaners. Later, they also opened a laundromat (locally called the “Washateria”).

Virginia was a faithful and loyal member of First Baptist Church in Lanett, where she sang in the Sanctuary Choir and also taught a fourth and fifth grade girls Sunday school class.

In 1969, while daughter and son-in-law Sandra and David Glover were in college in Tennessee, Virginia began a long held dream and took college classes at Southern Union Junior College. After several successful semesters, her advisor suggested she transfer to Auburn University, where she completed her B.S. in Home Economics in 1973. She was immediately employed by Lanett High School and began teaching home economics. Still enamored with learning she continued her studies while teaching and achieved a Master’s Degree from Auburn in 1976.

In early 1978, her husband Marion Fallin was diagnosed with cancer. After months of treatments he died in her arms at home in May.

In 1980, Sandra, David and April moved to Oak Ridge, Tennessee, where David served as Minister of Music at First Baptist Church.

On several visits Jenny was introduced to Walter Rule, a church choir member and deacon who had also lost a first spouse. Some say Sandra was the “match maker”, but really Walt and  Jenny needed no encouragement. At a choir pool party in the spring of 1981, Walt asked Jenny out for an ice cream cone, which she accepted. After several months of taking turns at commuting between Alabama and Tennessee to see each other (they even met halfway several times for a few hours at a McDonald’s on 175 near Cartersville Georgia), Walt asked her to marry him. She accepted and they were married in Lanett on Jan. 2, 1982. They enjoyed 21 happy years of marriage.

Their life in Oak Ridge was focused on their family and their church. Together they attended to the needs of Walt’s elderly parents, plus Walt’s sister Sue, but oftentimes Jenny took care of things while Walt was still working. They were involved in community activities, such as square dancing, bowling & golf (though Jenny just rode along on occasion). Jenny was a frequent hostess for many home gatherings for church and community functions, and she was a joyful member of a group of ladies called “The Lunch Bunch” that often included husbands. Jenny was a long-time member and sometimes officer of Arisa Garden Club in Oak Ridge. At First Baptist Jenny was a younger children Sunday school teacher and served as a church deacon and on the Personal Ministries Committee, in addition to being a faithful choir member into her mid ‘80s.

In 2008, Jenny was diagnosed with early onset Alzheimers. Sandra and David moved back to Oak Ridge in the fall to live with and assist her as the slow declining process continued. During several of Sandra’s extended surgery trips to St Louis 2014-16, Jenny “visited” at The Courtyards Assisted Living facility in Oak Ridge. This made her transition to full time care there, beginning in December of 2017, much easier. She received excellent care at The Courtyards in both the Assisted Living Unit and later the Memory Care Unit. Jenny made friends of both the elders and the care staff there, and they became additions to her extended “family”.

Hospice Care was added to her care beginning in March this year, and this greatly improved her comfort and quality of life levels, probably extending her life for weeks  if  not  months.  Granddaughter  April Martin was a frequent visitor during Jenny’s last months and discovered a new “treatment” for her: chocolate, especially Reese Cups! … which we think also extended her comfort and strength. Jenny was alert and interactive right up to the end, and died early Wednesday morning July 24, with her caregivers at her side.

The family will receive friends at 10 a.m. on Friday, Aug. 2, 2019, at First Baptist Church of Oak Ridge. A Celebration of Life worship service will follow at 11 a.m. with the Rev. Rory Naeve and Rev. Tim Bounds officiating. Burial will be at Oak Ridge Memorial Park.

Memorial gifts may be directed to First Baptist Church of Oak Ridge for the Organ/Sanctuary Renewal Fund, or to a charity of your choice, like the Alzheimer’s Research Foundation.

Weatherford Mortuary is in charge of the arrangements.  An on-line guest book can be signed at www.weatherfordmortuary.com.