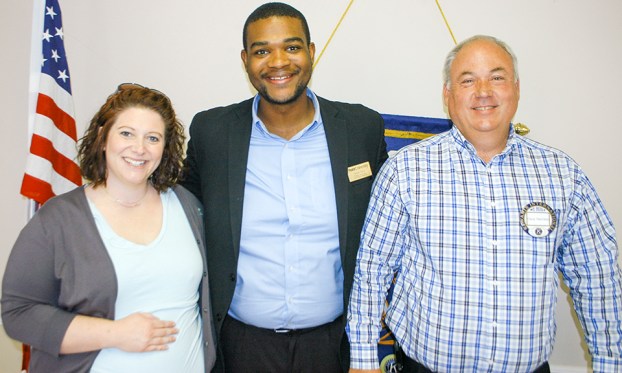 Point graduate reflects fondly on his days as a student

VALLEY — Tavaris Taylor was a student at Atlanta Christian College and on a tour of West Point when the announcement was made in the summer of 2011 that the college’s traditional campus would be moving to West Point.

It was also publicly announced the school would be changing its name to Point University. Taylor, now a Point graduate, serves as the school’s director of alumni and church relations and as an adjunct professor of international business.

During his time as guest speaker at for the Kiwanis Club of Valley on Wednesday, Taylor said he has fond memories about hearing of that planned move.

Eight years ago, he was part of a student group visiting West Point and the surrounding area to get a feel for the town. They liked the small-town feel, the lack of heavy traffic and the hustle and bustle that comes with being inside the Atlanta perimeter. Having a big lake nearby was pretty good, too.

“On the day the announcement was made, the president (Dean Collins) was showing us the area and was telling us what was to come,” Taylor said. “He told us we’d have a new name and a new location. It was the kind of big event not many colleges would attempt, but Point University is a little different from most colleges.”

Taylor said the move to West Point has proven to be a good one for Point. The school has grown from about 500 students on a single campus in East Point to 2,200 students on six campuses. An estimated 1,200 students are in Point’s dual enrollment program, he said.

“Coming to West Point has allowed us to expand our mission, and that’s to educate students for Christ-centered leadership throughout the world.” Taylor said.

A native of Conyers, Georgia, Taylor graduated from Point in 2013. Following graduation, he worked for a time with the Rockdale County government while serving as a youth pastor. In 2015, his life took a turn when he relocated to Puebla, Mexico, to work for Business as Missions and CMF International Globalscope.

During his time there, he completed his masters degree in international management and marketing from the Universidad de las Americas Puebla, one of the most prestigious universities in Latin America. He received a full music scholarship to sing with the university choir and opera, traveling throughout Mexico and Latin America.

In business, Taylor has consulted for companies entering the Mexican and U.S. markets. He said he is committed to faith and family, and the joy of his life is his relationship with God, and the love of his life is his wife, Michelle, who was with him for Wednesday’s lunch program.

Taylor sees Point being in West Point as a win-win situation.

“This community is a big part of Point, and Point is a big part of the community,” he said. “Lots of students are thinking about staying here when they graduate. We’ve only been here for eight years, but we’ve long known that we couldn’t do what we do without the support of West Point and the Greater Valley Area. We’d like to thank the local community for their involvement in making Point University what it is and what it is becoming. We want you to be alongside us in prayer as we continue to grow in the community.”

“I am confident that with the caliber of students we have they will do great things,” he said.

Taylor said close to half of the student body is now living in West Point. At one time, almost all of it was living in Valley and Lanett. With tuition for one semester costing $10,000, it’s most important for Point students to receive financial aid. Close to 95 percent of them do, Taylor said.

Long-range plans include building a four-story dormitory and a chapel that will seat about 1,200 people for events such as graduation, he said.

Taylor said that he wanted to thank Valley Mayor Leonard Riley on having allowed him to do an internship in the local area when he was a student at Point.

“I thank him for allowing me to do that right down the street from where I lived,” he said. “We do lots of internships at Point, and we’d like to have them in the local area. It’s better for the students to do that than to have to drive outside the local area.”

BEULAH — Thomas Hill had his first day as an assistant coach on the Beulah football staff on Wednesday morning... read more