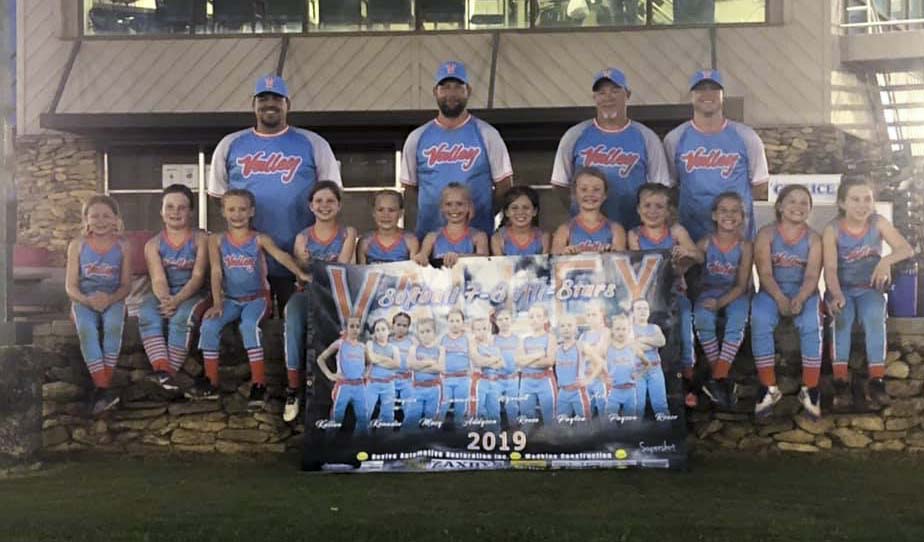 VALLEY — The Valley 7 and 8-year-old softball all-star team ended the season with a 4-2 run in the state tournament at Lagoon Park in Montgomery this past weekend. Valley finished fourth out of 10 teams in the bracket.

“Our girls fought hard,” Valley 7 and 8-year-old head softball all-star coach Stacey McManus said. “We ended up playing six games in 24 hours, so it was pretty tough, but we were really proud of them when it was over with.”

Valley opened tournament play with a 12-4 win over Centre on Friday night before losing to Gurley 13-7. The all-stars played four games on Saturday, winning 14-2 against Merdianville, 10-2 over Arab and 5-0 versus Talladega before losing 10-4 to Hamilton.

“We told these girls that before we went to our district tournament and our state tournament that they were to be good representatives of 7 and 8-year-olds from Valley, Alabama,” McManus said. “To go in there, show good sportsmanship and put it all out there on the field. They definitely did that.”

The team left such an impression that Gurley came back and supported the Valley girls after the team’s win against Talladega on Saturday.

In the coach-pitch age division, the Valley girls are aggressive at the plate, and scored more than 15 runs in some games in the district tournament. The all-stars run-ruled three of four of its opponents in the state tournament’s wins.

“We were proud of the way we played defense in this tournament, too,” McManus said.

The success of the seven and eight-year-old softball all-stars this summer adds to the growth of the sport in Valley. After the state tournament, McManus said that some coaches were discussing the possibilities of getting most of the players on the same travel softball team during the fall to keep the progress going.

“I want to encourage people that’s got girls that love softball to come out next season and join us out there on the field,” McManus said. “Hopefully, we can grow this thing and have some state champions in the next couple of years.”