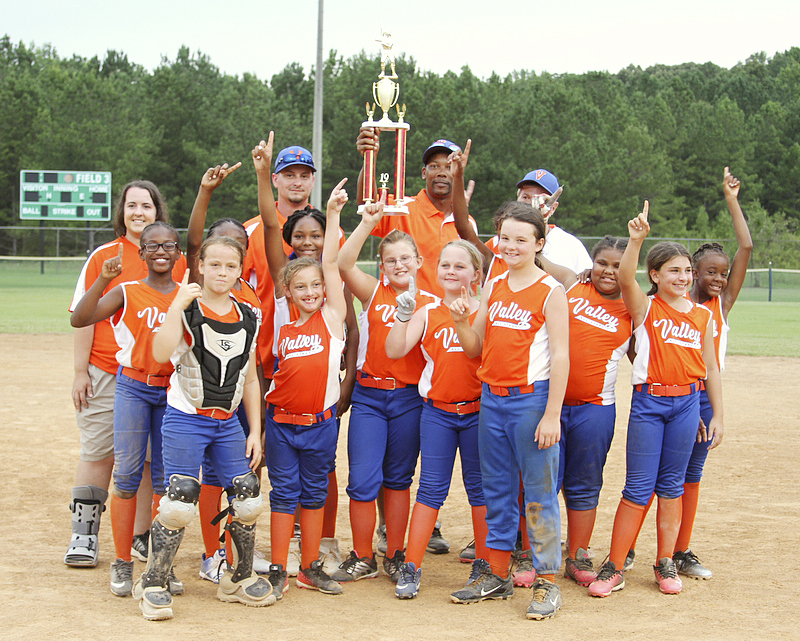 submitted | Times-News district champs: The Valley 9 and 10 year-old All-Star softball team poses for picture after winning the district tournament this past weekend in Talladega.

VALLEY — The 9 and 10-year-old Valley All-Star softball team won the district tournament this past weekend in Talladega after defeating Sylacauga  23-1 and 9-1. The team now advances to the state tournament in Montgomery at Lagoon Park on July 12 through July 14.

Valley’s 9 and 10-year-old baseball team will also be playing on the weekend of July 12 in the state tournament in Tuscaloosa.

The Valley 11 and 12-year-old All-Star baseball team lost 8-1 to Dadeville in the state championship in Tuscaloosa on Monday afternoon. It was the furthest the 11 and 12-year-old team from Valley advanced in “years,” according to Valley athletic director Mark Hudmon.

“First off, I’m very proud of them,” Valley 11 and 12-year-old All-Star coach David Hudson said. “They did exactly what was asked of them, they worked hard and they got along. That’s very important when you have a team is for them to get along and play as a team. It helped us to get as far as we did in the state.”

For some teammates, this summer marked the third year the group has played together.

“It felt amazing. It was pretty cool,” Valley second baseman and pitcher Trent Tidwell said. “It’s amazing that we’ve made it this far. We made it to second place in the state, that’s awesome.”

Multiple members of the 11 and 12 baseball team want to play in the majors when they get older, including Tidwell, left fielder Travonte Vines, shortstop Hayden Hendrix and pitcher Luke Hudson. Hudson and Vines wish to play for the Atlanta Braves, while Hendrix and Tidwell expressed their wishes to play in Miami for the Marlins.

“It makes you feel like you’ve done your job if they’re wanting to go to that next level,” Coach Hudson said. “College would be the first step that I would suggest to any of them, get through high school and get to college instead of going straight to the major leagues, but that’s exactly what you want [as a coach]. They want to continue playing baseball.”

The group of players and their parents were all smiles fresh of the return to Valley from Tuscaloosa on Monday afternoon, and the members of the team expressed their gratitude for the community’s support throughout the season.

“Thanks to all of our sponsors,” Luke Hudson said. “Everyone who has helped us during our journey to state, and thank you to the community.”