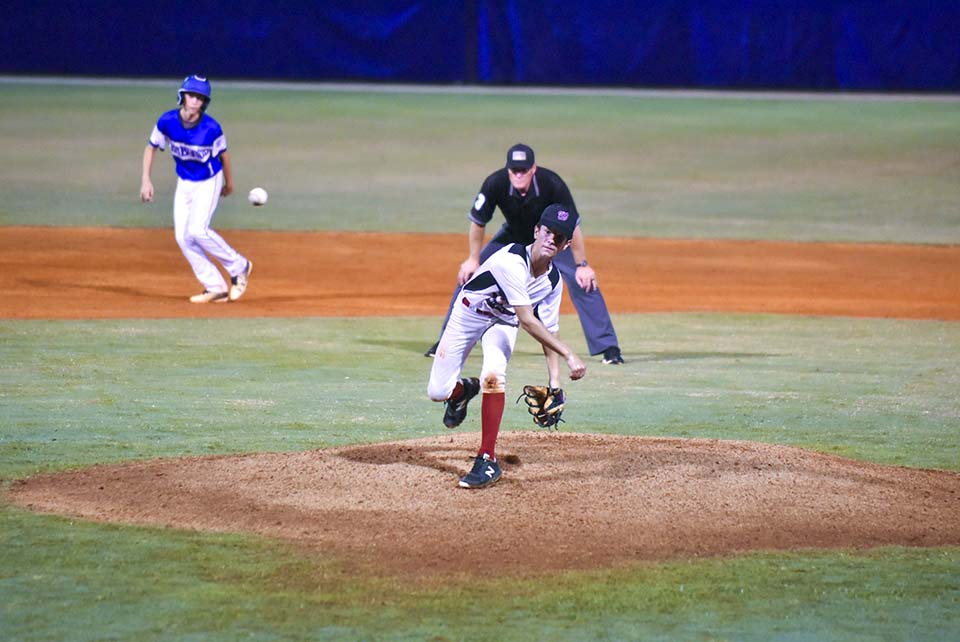 Rashad Milligan | Times-News on the way: West Point 14 and under All-Star pitcher Jhon Akins delivers a throw on Monday night against Hobgood in the state tournament.

WEST POINT — The 14 and under baseball all-stars of West Point’s season ended in harsh fashion this past week at the state tournament. West Point hosted the tournament, as all of the games in the bracket are being played in West Point Park Baseball Field through Thursday.

West Point lost 15-0 in the team’s tournament-opener against Elbert County on Sunday afternoon. The opponents got an early jump on the home team after scoring six combined runs in the first two innings.

Elbert County then scored six runs in the fourth inning with a two-run RBI, a bases-loaded walk, and three wild throws in the infield. After a deep shot to the left-field warning track in the fourth inning and a ground ball that squeezed past the gap of West Point’s third baseman and shortstop, Elbert County increased the lead to 14-0. After scoring another run in the fifth inning, and West Point’s lineup was unable to score, the game was called.

West Point came back to the field on Monday night to face Hobgood, beginning play shortly after 9 p.m. EDT due to lighting delays earlier in the evening. Hobgood’s starter went through West Point’s lineup in six pitches in the top of the first inning.

Hobgood went on to score 10 runs in the first inning before West Point got a tag at second base to end the frame. Starter Steven Davis, Jr. was taken off of the mound in favor of Jhon Akins after the score reached 8-0.

In the bottom of the second inning, Hobgood increased the lead to 16-0 before Ward took a visit to the mound, making no pitching change. The bases were soon loaded again, and Akins was taken off the mound for Dylan Stotsky.

West Point eventually found itself down 20-0, but the group didn’t quit. Parents in the stands and coaches on the field continued to encourage the West Point roster, and after bases loaded at the top of the fifth inning, Mikey Posey scored an inside-the-park-home run with a deep hit into center field.

“One of the principles that I was brought up on was to never give up,” Ward said. “No matter how bad it seems, no matter how tough it gets, you never give up because just when you think you can’t do a little more, you can. We didn’t win the game, but that ended on a high experience. The kids enjoyed that.”

The game was called after the top half of the inning, as Hobgood advanced after a 20-4 win.

“It’s not every day that guys can say that they played in a state tournament,” Ward said. “My expectation is that they use this experience as a foundation and a building block as they transition to high school ball.”