Chambers hangs on to beat Tuscaloosa 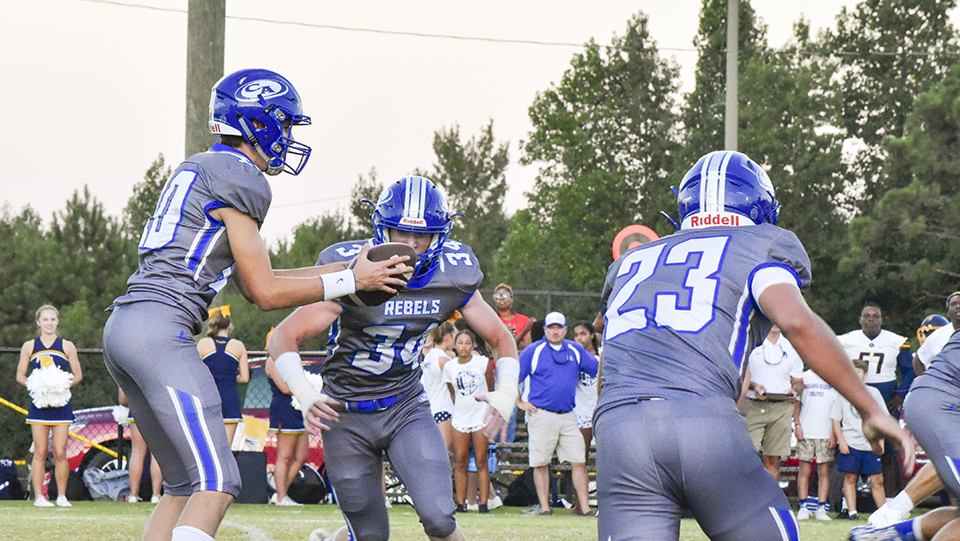 Chambers Academy quarterback Payton Allen, 10, fakes a handoff to running back Braxton Allen, 34, with fellow running back Raphe Daniel running across the backfield Friday night in LaFayette against Tuscaloosa Academy.

LaFAYETTE — Chambers Academy head football coach Jason Allen told his team to create a turnover and they would win the game.

At the time, they were trailing 14-13 Tuscaloosa Academy and the ballgame looked like a heavyweight fight with each team giving the other its best shot. Early in the fourth quarter, just after Chambers Academy got the lead 29-28 after a gusty two-point conversion score by running back Braxton Allen, coach Jason Allen got his wish.

Tuscaloosa Academy fumbled inside Chambers Academy territory and the ball was picked up by the Rebels.

Chambers Academy then went on a seven-minute, 14-play drive that ended in a Braxton Allen touchdown. That score put Chambers up 35-28, which held as the final score with the clock went to zeros at Tolbert Field Friday night.

“I told the kids going in it was going to be like a Rocky movie,” Jason Allen said. “We are going to hit them and they will hit us back and the last man standing is going to win the game.”

Tuscaloosa was able to get the passing game going as the Knights junior quarterback Mayes White ended up with three touchdown passes and one rushing touchdown. However, Jason Allen felt the game was won at the line of scrimmage.

“I thought we physically lined up and played great,” he said. “We lined up and kicked them right square in the teeth and made them like it.”

Tuscaloosa Academy head football John Copeland’s homecoming to Chambers County was spoiled but he had a simple reason as to why his team wasn’t victorious Friday night.

“They made the plays and we didn’t,” he said. “We had opportunities to win that football game, especially on the defensive side of the football. We just couldn’t make the plays for whatever reason.”

He said part of the reason could be focusing more of the little things that win football games.

“Our kids go through practice not paying attention to the little things and I preach to them all the time that is what will get you beat,” Copeland said.

However, it’s tough for him not to look back when his squad was trailing by one point and in Chambers Academy territory to wonder what would have been.

“That fumble killed us,” he said. “Not only from a football standpoint but from a mental and momentum standpoint.”

The scoring Friday night started fast and furious. Although the Rebels stalled on their first drive, the Knights revealed their passing game quickly, throwing the ball six times on the first drive, ending with a 35-yard strike to junior receiver Houston Evans.

However, Chambers answered quickly with a big run by Payton Allen, coupled with a fourth-down conversion. The drive was capped with a 11-yard rushing touchdown by Raphe  Daniel.

Things didn’t seem to be getting better for Chambers Academy after halftime as White hit Evans again for 37 yards. The Knights also benefitted from a pass interference call in the endzone to set up a 9-yard touchdown throw from White to senior wide receiver Carson Woods.  Early in the fourth quarter, trailing 28-21, Braxton Allen hit a hole for a 30-yard run into red zone and fullback Dijon Darden punched it in from one-yard out.

Then, Jason Allen made the call to go for two, putting the Rebels up 29-28 on the strength of the physical line play, as Braxton Allen scored from three yards out.  Jason Allen said he knew Tuscaloosa would score but he commends his defense for staying tough.

“We knew they were going to get some points,” he said. “To hold that team to 28 points is pretty strong in my opinion.”

Next up for Chambers Academy is another home game against Abbeville Christian.