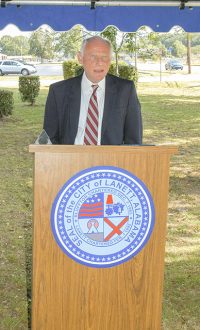 LANETT — On Monday, the Lanett City Council unanimously approved a resolution to adopt the Rebuild Alabama Transportation Plan. Such approval will allow the city to apply for funds made available by the new gas taxes that will be going into effect in September.

This past spring, the state legislature met in special session to approve the state’s first motor fuel tax increase since 1992. The legislation set aside a state match program for local projects of public use.

The resolution approved Monday allows the city to seek grants from the ATRIP-II program.

“We have to approve a resolution on this saying how we will spend the money,” said Planning and Development Director Tony Chandler. “It relates to an audit.”

ATRIP-II funds will be awarded on a competitive basis with applications being judged by an ATRIP-II Committee based on such factors as economic growth, public safety and stability of the state. The project will provide between $30 million and $50 million a year with the ALDOT director determining the final amount available that year. A total of $30 million will be allocated in fiscal year 2020. The maximum amount of funding to be made available to any one project is $2 million.

In other business on Monday, Council Member Jamie Heard read a letter from Betty Lyons thanking the city for their support of the annual Alfred Lyons Day, which took place in the West Shawmut community on Sunday, July 28. It marked the one-year anniversary of the passing of Mrs. Lyons’ husband. To mark the occasion, city workers put blue ribbons on the Alfred Lyons Bridge signs and cut the grass along the approaches to the bridge.

Council Member Heard also thanked city police officers for the outstanding job they did in maintaining order and directing traffic on the recent West Shawmut Day, which drew an estimated 7,000 people for lots of socializing, grilling out and reminiscing about the community they had grown up in.

“They did a great job,” agreed Council Member Angelia Thomas. “I’ve gotten so many positive comments from the citizens on how helpful our police officers were that day.”

Thomas asked Mayor Kyle McCoy if a work session could be held for council members to discuss a variety of projects taking place in the city right now, such as the mill cleanup.

“We have a lot going on right now with the goal of Lanett being a better place,” she said.

The mayor said that could be done and that council members who chair committees could call committee meetings to discuss issues as well.

Council Member Shirley Motley noted that this Thursday will be the first day of a new school year.

“If you are out driving around early that morning or in the afternoon when they are let out of school, make sure you watch for the children,” she said.

McCoy said he was pleased things had gone well on West Shawmut Day.

He also thanked local residents for their thoughts and prayers for Fire/EMS Chief Johnny Allen, who recently suffered a mild stroke. He has returned home and is doing well.

“He sounds great on the phone,” the mayor said. “He told me he’s going to take it easy for a while and do what the doctors tell him.”