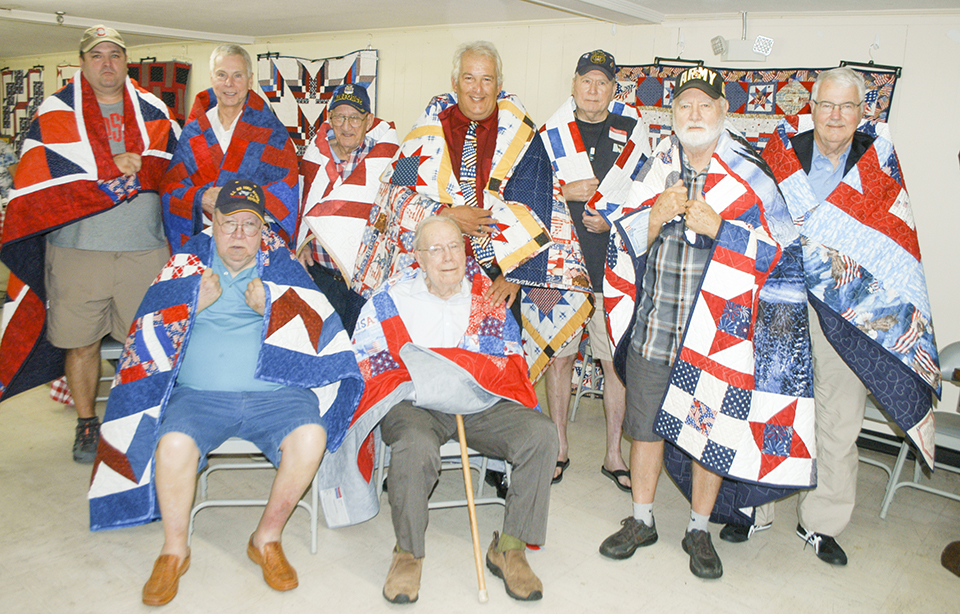 It was the most veterans honored at one time by the Georgia-Alabama State Line Chapter of the Quilts of Valor and included veterans of the Army, Navy and Air Force who served in World War II, the Korean War, Vietnam and the Iraq/Afghanistan conflicts.

One of them, Army veteran Ronald Gilmore of Fayetteville, Georgia became emotional when presented his quilt.

“I just wish my dad was here to see this,” he said. “He grew up in Lanett and was a paratrooper in World War II. He was killed in St. Mere Eglise on the day after D-Day. That was the first town in France to be liberated from Nazi control. My daddy was a member of the Greatest Generation, and I’m very proud of that. I’m also proud to have served in the U.S. Army, but I never sacrificed the way my daddy did. If our country ever needed another Greatest Generation, it does now.”

Another member of the Greatest Generation was there to receive a quilt. Herbert Ausmon is 99 years old. He served in the U.S. Army in WW II. Seventy-five years ago this summer, he was wounded in the Normandy campaign. A Shawmut native, he still lives in Valley. Members of his family were with him to witness the quilt presentation. Most of the other recipients had family members there as well.

A total of 14 women from the east Alabama-west Georgia region are active in the local chapter. They meet on the first Saturday of every month to sew new quilts and make presentations to veterans from the region.

“We really enjoy doing this, and our group is growing,” said Rachel Ramirez of West Point, who coordinates the group.

Mayor Steve Tramell, owner of sewingmachine.com, attended the presentation and thanked each veteran for their service to our country.

Founded by Catherine Roberts in 2003, the Quilt of Valor Foundation thus far honored a total of 222,517 quilts to U.S. veterans and active duty military personnel.

“That’s a lot, but there are so many more who should be honored,” said State Line Chapter spokesperson Shelia Simpson. “Each presentation has a three-part message. First, we honor you. Second, we realize that freedom is never free. Our quilts thank you for your part in keeping our country free. Third, these quilts offer comfort. They are not meant to be hung on the wall or put in a display case. We want you to wrap this quilt around you whenever you have dark memories of the past and what you went through. We want you to know you are loved and are always welcome here.”

Simpson advised the veterans to wash their quilts in cold water and to use color catches to help preserve the quilt’s brilliant colors.

“We are begging for fabric to keep making these quilts,” she said. “Anyone who could help us with that we’d really appreciate it.”

Rodgers, who served in the Vietnam War, thanked Martha Scott for making his quilt. Holladay, who was in the military from 1948-70, today lives in Valley. He participated in the Berlin Airlift of the late 1940s and the Korean War. Lashley also lives in Valley. He was in the Navy from 1964-68 and served in Vietnam in 1966-67. Hartley served from 1986 to 1998 and was in the Navy for a time and also in the Marines. Hap Arnold is a Vietnam vet.