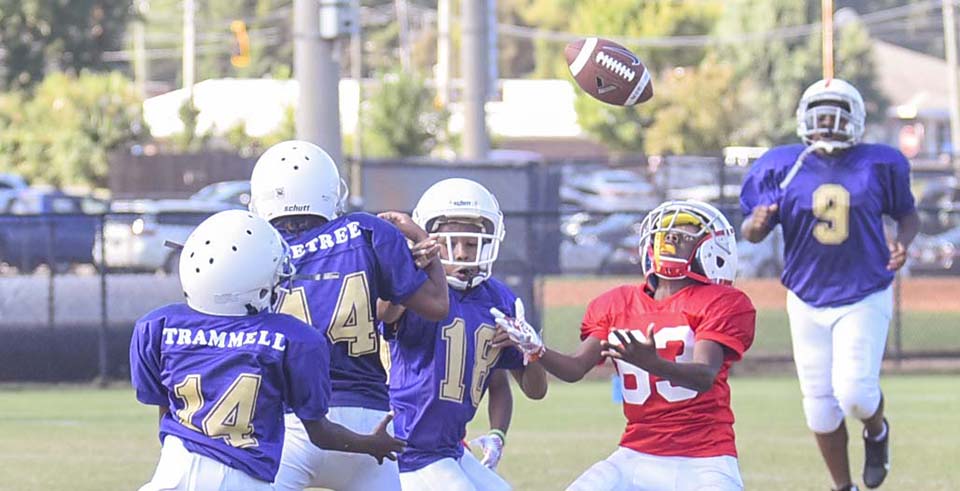 Rashad Milligan | Times-News eye on the ball: Raiders wide receiver Jah’vinte Mcqueen waits for a tipped ball to fall into his arms.

WEST POINT — The Hyundai Glovis Raiders opened up the 2019 season with a 27-0 win over the Diverse Power Falcons on Saturday morning.

“I felt like the performance was great,” Raiders head football coach Markei Adams said. “They came together as a team. At first, they were playing a little down, but I would grade it a 95 percent.”

“He’s just now getting a feel of the game,” Adams said. “I feel like by mid-season, he’s going to be unstoppable. As you can see, three touchdowns today in his first football game ever playing is just great.”

Adams said that he feels like the team can improve on its tackling, decision-making and remaining level-headed.

Saturday’s turn out had the parking lots surrounding the fields in West Point packed as representatives from Lanett High School, LaFayette High School and Troup County High School were in attendance to support the 11 and 12-year-olds.

“I enjoy the kids and coaching them up,” Third-year coach Adams said. “I’m looking forward to having a great season … This is big for the kids because it gives them something to do. It shows them that we care about them.”

The Raiders return to action on Oct. 7 to face the MC’s Heating and Air Cowboys in West Point at 7 p.m.