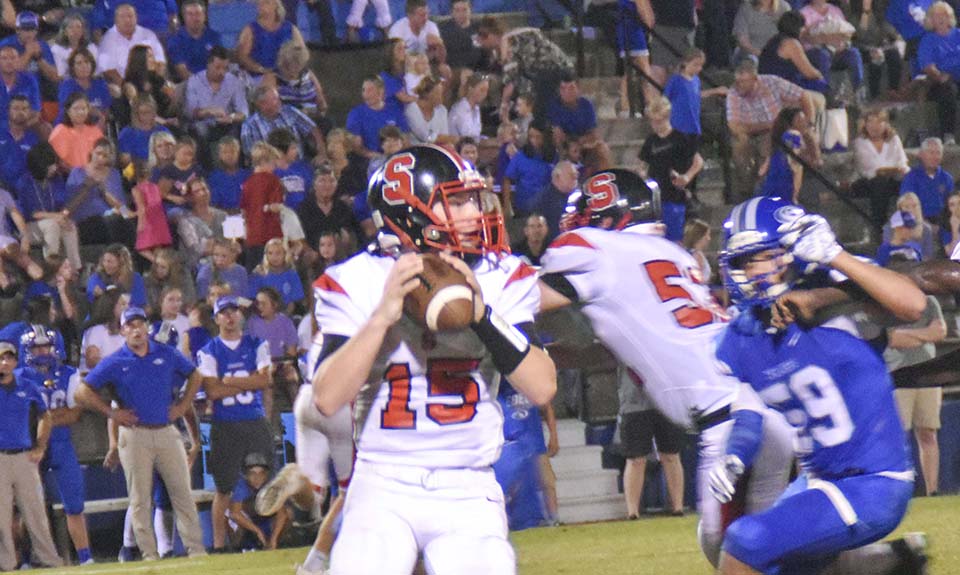 File photo | Times-News Plank: Springwood quarterback Jordan Plank sits back in the pocket before delivering a pass against Chambers Accademy in 2018.

Many programs in the Greater Valley Area are now in the second half of the regular season. Tonight’s slate of games includes a local rivalry and arguably one of the top team’s toughest matchup until the postseason.

For the second-consecutive week at home, Springwood School (2-3, 0-2) is hosting a ranked opponent. AISA No. 3-ranked Chambers Academy (5-0, 2-0) is coming into town to face the Wildcats after the Rebels defeated AISA No. 10-ranked Southern Academy 42-21.

“Springwood is in the second year under Coach [John] Gartman and I’m expecting a much-improved team [since] last season,” Chambers Academy head football coach Jason Allen said. “We’ve got to go to their place, so we will have to be ready as they will be emotionally charged up to play us at their place.”

Springwood is coming off of a 69-15 loss to AISA No. 1-ranked Autauga Academy last week.

1A No. 5-ranked Lanett (5-0, 3-0) heads on the road up to Roanoke to face 4A Handley (3-1, 2-0). The Tigers are coming off of a 43-6 win over Childersburg and received votes in this week’s Alabama Sports Writers Association (ASWA) prep poll. In last week’s win over Notasulga, senior quarterback Kristian Story ran for three touchdowns and threw for another. In 2018, Lanett defeated Handley 32-20 at home in a game that was tied until midway through the third quarter. The Tigers currently have the best record among the remainder of the Panthers’ opponents this regular season.

Valley (3-2, 3-0) looks to keep its three-game winning streak alive against Marbury (3-1, 1-1) for homecoming. The Rams are coming off of a 42-13 victory over Carroll last Friday night on the road.