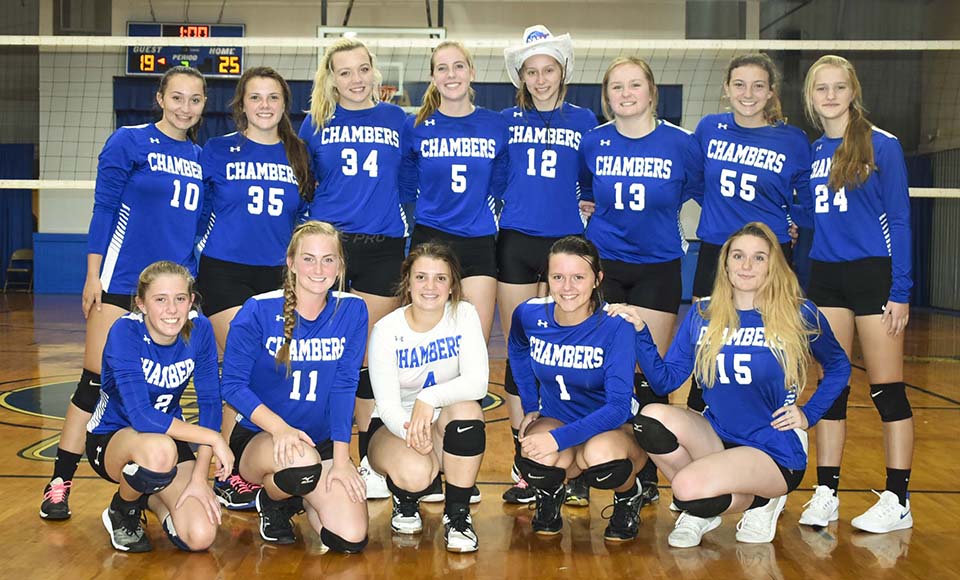 Rashad Milligan | Times-News moving on: The Chambers Academy varsity volleyball team poses for a picture after advancing to the AISA A elite eight round on Tuesday night. In the front row, pictured from left, are Claire Allen, Natalie Lovelace, Audra Slay, Kayla Chambers and Hayley Pouncey. In the back row, from left, are Lindsey Fuller, Brandalon Rombokas, Britten Stephens, Bailey Allen, Alyssa Sorrels, Megan Ware, Chloe Mitcham and Mattie Reese.

The Rebels used the match to represent senior night for the program as well, with libero Audra Slay being honored. It was an emotional night for Slay’s entire family, whose father keeps stats at each match and mother has served as an assistant coach ever since the program began.

“I have been here since every one of these little girls stepped on the floor for the first time as scared little sixth-graders and fifth-graders,” Chambers Academy assistant volleyball coach Kim Slay said. “To see them now, up, swinging and playing, it’s such an elite game. We have several [players] I think can play at the next level and there are others whose skills I just see progress every day. It warms your heart. I’ll be sad to leave them.”

After dominating the first set, the Rebels controlled the second set, for the most part, as well.

It wasn’t until the third set that Chambers Academy saw push back from the visitors when the Rebels found themselves trailing 14-19 late in the match.

At that moment, star sophomore outside hitter Bailey Allen subbed back in the game, scoring two quick points for Chambers Academy. Then, sophomore Claire Allen hit an ace.

After Abbeville hit a ball out of bounds and Bailey tacked on another kill, the set was tied at 19. Chambers Academy then used that momentum to cruise to the final six points of the victory.

“We have a good set of hitters,” Coach Slay said. “Everybody on the team, including the back row, can all hit. It’s not just a one-trick pony. That is what’s going to be our advantage going in because most teams are not as blessed with as many hitters as we have, especially on the 1A level. All of our girls on the court are capable of getting the ball to the other side and I love that. I love seeing the ball passed around, and of course we have Bailey, she’s our go-to because she’s a beast over there, she can get off the ground, really come down and smack on the ball. We have other girls who are equally capable of seeing the court, seeing the gaps and they might not swing as hard, but they can put the ball where it needs to go.”

Chambers Academy has advanced to the final four in the previous two seasons, something that Audra, who jokingly said she’ll remember the long-hot summers in the Rebels’ gym pre-AC the most from her playing days, thinks about often and is now hungry for more.

“We’re all very motivated,” Audra said. “It’s been rough because we’ve had some good players in the last couple of years and we’ve come up short. Two years ago in the final four, we played almost a three-hour match. We just went back-and-forth and we came up short in the end. Hopefully this year we can pull all the way through.”