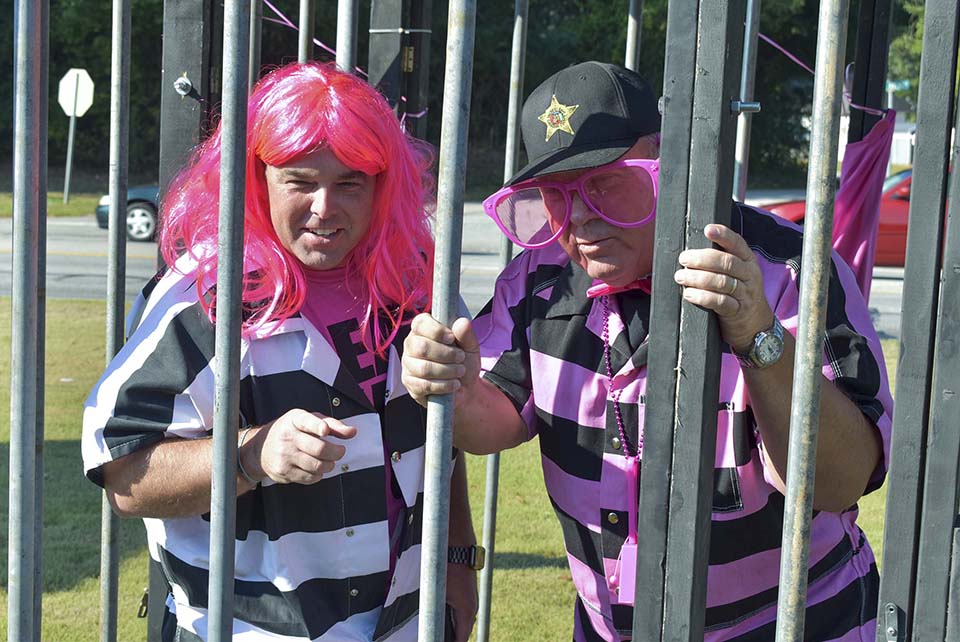 Breast cancer is undoubtedly one of those things that has touched so many people’s lives. Not only throughout the Greater Valley Area but the entire world. Many of the people who hear the fateful “C” word after visiting a doctor has the first instinct that they are going to die.

That’s not the case anymore.

According to Radiation Oncologist Dr. John Cabelka at East Alabama Medical Center, the medical profession is now saving more lives than ever before.

Also, there are people right here in the Valley area that are fighting to make a difference.

The Chambers County Sheriff’s Office got involved this past Friday by locking up its own breast cancer survivor — Sheriff Sid Lockhart.

Lockhart was diagnosed with breast cancer in 2002, and like many who are unlucky enough to get the disease, he wondered how he was going to make it. However, he did, and he did so without missing much time as sheriff.

Now, he is adamant about giving back to the community and raising awareness about breast cancer for all genders.

This past Friday, he stepped inside a makeshift jail cell outside of Renasant Bank in Valley and couldn’t get out until a $2,500 bond was raised for his release. The money went to the Breast Cancer Research of Alabama. With the goal of only $2,500, the sheriff’s office exceeded more than $6,000, according to Major T.J. Wood, the sheriff’s cellmate Friday afternoon.

Lockhart said Friday that the Greater Valley Area’s spirit when it comes to giving is second to none.

“I tell people everywhere I go that when it comes to cancer research, tornado victims, hurricane victims, someone’s home burns, these people in this area of West Point, Lanett, Valley, Beulah, I cannot say enough of the heart that they have to give,” Lockhart said. “[They] keep giving. A lot of times, they don’t have the money, but we don’t want someone to feel bad if you can’t give but a dollar. It all adds up.”

Wood, who personally hasn’t dealt with breast cancer, said it has still touched him and his family. Participating in events like this past Saturday’s is a no-brainer for him.

“I enjoy doing this because there are people in my family who have survived cancer,” Wood said. “That’s why it’s really important to me to raise funds for the research to try to figure out what we can do to stop this. It’s taken over a lot of families and a lot of lives.”

We applaud the sheriff’s office for its contributions to raising awareness of such a deadly disease. We also thank every resident who gave what they could to fight against something that can ruin a person’s life in a matter of seconds. Although things are changing and the success rates are getting higher, there’s still more to be done.

Let Friday’s event, as well as the City of Lanett, which turned its downtown fountain pink and the great work being down by the Working to Help those In Pink (W.H.I.P.) group serve as an inspiration to keep fighting.