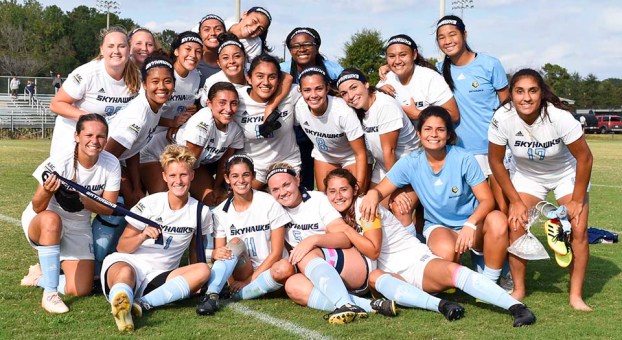 RASHAD MILLIGAN | Times-News SKYHAWK FAMILY: The Point University women’s soccer team poses for a picture on the field after a 5-1 victory over Columbia on Wednesday afternoon.

Skyhawks defeat Columbia, look to climb back in postseason picture

WEST POINT — Members of the Point University women’s soccer team (5-7-1, 3-5-1) hope that Wednesday afternoon’s 5-1 win over Columbia was the victory the Skyhawks needed to fuel the team to its final run this regular season.

Within the game’s first two minutes, Columbia’s Charlotte Daniels scored on an assist from Courtney Carrier.

Seven minutes later, Point sophomore forward Kelly Carlisle struck the equalizer for the Skyhawks. Near the midpoint of the first half, Carlisle scored again to give Point the lead. Marquez assisted on both of Carlisle’s goals.

“It felt really good, we worked as a team,” Carlisle said. “My team helped me by giving my really good assists, and that helped a lot.”

At the 48:09 mark in the second half, Marquez made a smooth move past the final Columbia defender in her way for an open-net goal to increase the Skyhawks’ lead to 3-1.

Carlisle had one last great look at the goal on a missed opportunity to complete the hat trick with 33:30 minutes remaining in the game.

“I wanted it badly,” Carlisle said of the chance to complete the hat trick. “I’ve been struggling this year to get my first goal, it felt good getting my confidence back today with the two goals. Maybe next game.”

With 17 minutes remaining in the second half, junior forward Vanessa Lara took a deep shot from the right corner of the field that Columbia’s goalkeeper initially trapped on her fingertips in the air before having the ball fall out of her hands once she landed and watching the Skyhawks’ fourth score of the day roll in the net behind her.

For good measure, Marquez drilled a deep free-kick at the 88:10 mark.

“I don’t know,” Marquez said before smiling when asked how her final shot went in. “I’ve been out the last three games due to injuries [right ankle sprain], I haven’t been playing that much. I just saw it, that’s my end goal, I practice those a lot and I felt it in my bones.”

In addition to the scoring exhibition, Point won the battle of physicality defensively, led by junior midfielder Emily Porter and senior goalkeeper Martha Mormeneo. Mormeneo was recently named the conference defender of the week.

“We have two new people back there right now,” Marquez said. “We have a new center back and right back. We pulled it off. In the beginning, we were still figuring it out, they got a goal, which was fine because we answered right back.”

Point is currently five games back in the conference with four conference games remaining in the regular season. Only three games separate the ninth-place Skyhawks and third-place Tennessee Wesleyan in the standings.

“It’s now or never,” Marquez said. “Our right now is to make it to playoffs because playoffs are a different game. If we just make it there, anything can happen.”

Point returns to action this Saturday afternoon at NAIA No. 18 Georgia Gwinnett College in a non-conference game.

For the second-consecutive week, a team from the Greater Valley Area has moved up in the Alabama Sports Writers Association... read more