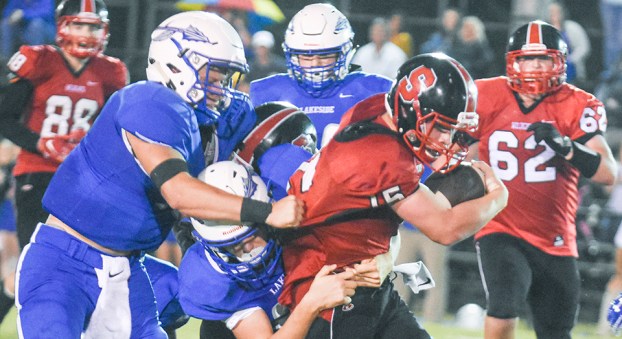 daniel evans | Times-News not going down: Springwood School’s Jordan Plank tries to break a tackle during Friday’s game against Lakeside.

LANETT — On homecoming night at Wildcat Stadium, Springwood got huge games from senior quarterback Jordan Plank and junior running back O.J. Tolbert to lead the Wildcats to a 59-34 drubbing of the Lakeside Chiefs. The win improves the team’s record to 4-5 on the season and puts them in a position to possibly host a home playoff game. The Wildcats finish the regular season next Thursday at Lee-Scott.

Playing one of the best games of his Springwood career, Plank had 220 yards in total offense – 150 yards rushing and 70 yards passing – with two touchdowns. Tolbert ran the ball for more than 100 yards and also had two scores. Senior linebacker/tight end Coleman Hill had a monster game for Springwood. He had a 30-yard field goal, several of his kickoffs were into the end zone and he had numerous big plays on defense.

Springwood scored on their opening possession, driving the ball 76 yards and getting a score on a short run by Tolbert. Hull’s PAT made it 7-0 in favor of Springwood with 2:23 left in the first quarter. Lakeside came back to tie it at 7 on their second possession., but the Wildcats would dominate the remainder of the half. Of five first-half possessions, they had four touchdowns and a field goal. The Chiefs couldn’t stop Springwood’s offense all night. The Wildcats led 30-7 at intermission and with reserves playing much of the way added 29 points in the second half to win in a big way.

With the game tied at 7-all, the Wildcats drove 70 yards on their second possession to take the lead for good. On a third-and-one play from the Lakeside 28, Plank ran off left tackle and simply would not be denied. Breaking numerous tackles along the way, he made it to the north end zone, putting Springwood ahead to stay, 13-7, with 9:55 left in the half.

Hull missed the extra point, and it angered him enough to take over on defense on the next Lakeside possession. On first down, he batted down a pass at the line of scrimmage, on second down he sacked the quarterback for a big loss and on third down pressured the quarterback into a bad throw.

After a short punt, Springwood took over on the Chief 45 and drove it in for their third score of the half. The drive was highlighted by a beautiful catch on the sideline by Louis Morrison, who got both feet in bounds NFL style. The Wildcats overcame some penalties to score more points, this time on a short run by Plank. Hull’s point-after made it 20-7 with 4:16 left in the half.

Springwood’s defense stymied the Chiefs on their next possession, and the Wildcats had great field position after a short punt, starting on the Lakeside 46. A big play in the passing game, with Plank connecting with Kannon Key, was the big play of the drive. The team got points on Tolbert’s best run of the night. From the Chief 14, he broke off the right side of the line, sifted through defenders and dove headlong into the end zone, just inside the orange pylon. Hull[’s PAT made it 27-7 Springwood with 31.2 seconds left before halftime, but the ‘Cats were not through scoring.

Tolbert pulled off another big play, this time an interception and a long return down the far sideline to put the Wildcats in business. There were only 2.4 seconds to go in the half, but time enough for Coleman to connect on a 25-yard field goal to lengthen the lead to 30-7.

In the third quarter, Springwood took up where they left off. On their first possession, they drove it 67 yards to make it 37-7. The drive was capped off by Ethan Plank scoring on a short run off the left side of the line. With 5:35 left in the period, Springwood had a 30-point lead.

The visitors then scored on a fluke play to narrow it to 37-13. On the scoring play, the Chiefs completed a pass over the middle and as their receiver was struggling for more yardage the ball popped free and went right to a teammate who easily ran it in for a score.

Springwood made it 45-13 when a fourth-and-dumb play failed for Lakeside. They went for it on fourth and 11 on their 31-yard line. Hull sacked the quarterback for a big loss back to the 18. The ‘Cats took over there and made the end zone in two plays, Kannon Key scoring from in close. On the conversion, Springwood completed a two-point pass play to make it 45-13 with 11:29 left in the game.

With reserves playing the rest of the way for Springwood, both teams managed more scores to pile up the final margin to 59-34.

Following some frustrating losses earlier in the season, winning a game by a wide margin was sweet for Springwood. They will be out to complete the regular season 5-5 next week at Lee-Scott, a team that’s much improved over last year’s 0-10 mark.