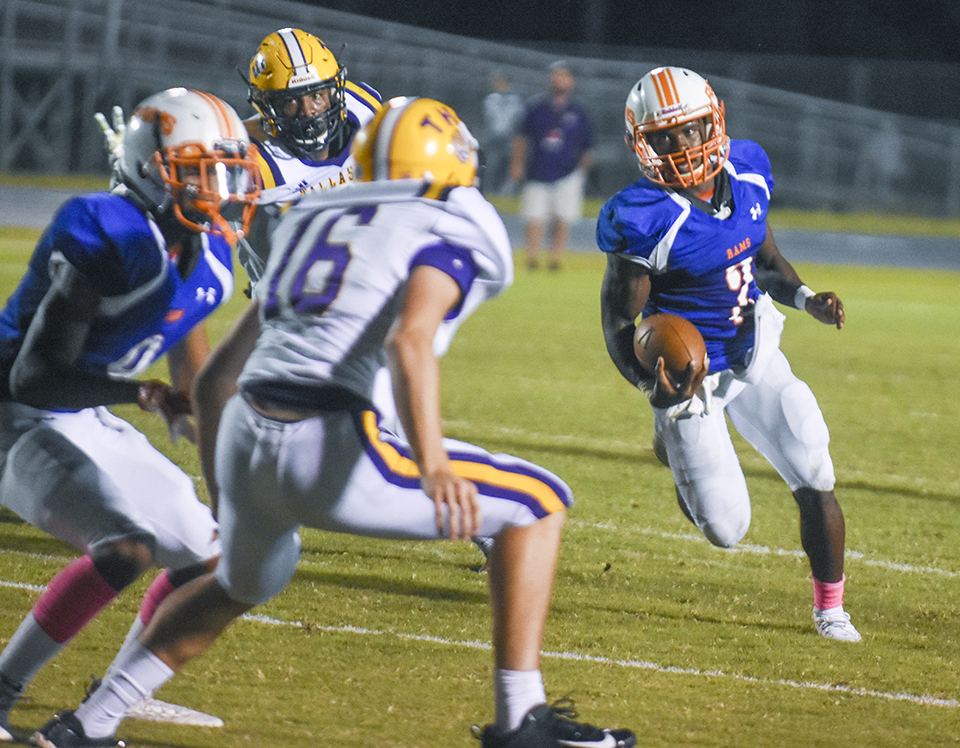 “[The win] clinched playoffs, yes, but it didn’t clinch our goal,” Valley head football coach Buster Daniel said. “Our goal is to be region champs, that’s what we’ve been talking about all year and we’ve still got a couple of more games to play, but I’m proud of my kids. It was a hard-fought game, that’s a good football team that we just beat. They’re scrappy, I’m proud of my kids for the win.”

The game got off to a slow start offensively for both teams, until Tallassee fumbled a punt with 1:46 remaining in the first quarter.

The Rams wasted no time on the next offensive possession, with sophomore quarterback KD Hutchinson completing a touchdown pass to Randall Brooks with 1:34 remaining in the opening period.

Tallassee senior tight end Tavarious Griffin then broke two Valley tackles to get the Tigers into the red zone to begin the second quarter.

The Tigers got the ball to the goal line, but the play was called back due to a holding penalty. A couple of plays later on fourth down, Tallassee sophomore Jayln Daniels grabbed a touchdown pass from sophomore Marciano Smith to get the Tigers on the board. The PAT was no good.

With 34 seconds remaining in the first half, valley junior Jacquez Trammell got the ball down to the one-yard line, setting up a Josh Heath touchdown run on the next play to get Valley out to a 13-6 lead heading into the break.

Smith came out early in the second half aggressively running the ball and getting the Tigers a couple of first downs, but Tallassee’s drive ultimately stalled and ended with a punt.

On the ensuing Valley drive, Hutchinson scrambled on the edge and got the Rams to midfield. Senior tight end Jaden Hamilton made a big grab on the next play to get Valley into the red zone. In the preseason, Daniel said that having Hamlin, primarily a defensive end, line up at tight end for a few plays would be a possibility this year.

Heath then willed the Valley offense into the end zone again with another touchdown run. The junior running back filled in for starting running back Bj Baker, who was held out of the game for “violating team policy,” Daniel said.

“Josh played great,” Daniel said. “He ran the ball extremely hard. He’s playing both sides of the ball. He’s playing cornerback and running back, so he was tired, but he kept pushing through. He did a great job for us tonight. I’m proud of him.”

Valley converted on fourth and short in Tigers territory to begin the second half. It appeared as if the Rams were running the ball until Hutchinson completed a 37-yard touchdown pass to Hamlin on the next play.

Tallassee then began driving down the field a couple of series later with completed passes to sophomore Clayten Gough and Griffin, who got the Tigers inside of the 5-yard line. The visitors ended the drive with a short touchdown run by sophomore Zavion Carr with 4:12 minutes to go in the fourth quarter.

After taking a series off, Hutchinson re-entered the game after the final Tigers touchdown. The Rams relied heavily on junior running back Dalton Dunn on the drive to get them inside of the Tallassee 5-yard line again. Hutchinson ended the drive with a two-yard keeper with 1:58 remaining in the ball game.

“I thought we played hard in the first half,” Tallassee head football coach Mike Battles, Jr. said. “We had two touchdowns called back, we didn’t get any breaks and they made some big plays. When we had chances to make plays, we didn’t make them or got penalties on them. When they had chances to make big plays, they made them. That was the difference. They wore us out in the second half, they lined up in that heavy set and we don’t have anyone like [Hamlin] or [senior lineman Daniel Osborne], our guys weigh 200 pounds. They did a great c coaching job of getting their big guys to knock our guys back and that’s what worked for them. They’re a good football team. They have a lot of size and talent, so they’re going to be tough to beat. They do a good job and we’ll go right back to work and get ready for next week.”

Tallassee returns home next week to host Rehobeth, while Valley now has an open week. The Rams return to action on Oct. 18 at Rehobeth.