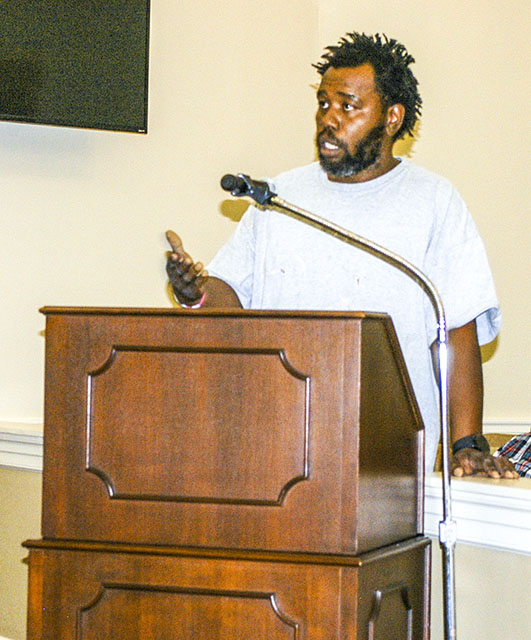 Above, Faheem Shabazz asks the Valley City Council for time to repair a condemned home he recently purchased. — Photo by Wayne Clark

It rescinded a previous condemnation action to give a new property owner time to clean up the land himself. Faheem Shabazz told the council that the property in question is adjacent to his property on Hill Street.

“When I purchased it from them, I didn’t know of the city’s plans,” he said. “I gave them some time to have all their belongings out. I’ve lived next door to that house for 20 years. My house was not in good condition when I moved there, but I rehabbed it. I would like to do that with the house next door that I have purchased. I would like to bring it up to standards and for it to be in compliance with city codes. I’ve been told it is one of the oldest homes in the area. I would like to have the opportunity to rehab it.”

Valley Building Inspector Reid Riley told the council he had met with Shabazz to discuss the matter.

“We have worked out an action plan,” he said. “He’s a new owner in the middle of this process. I feel like he should have an opportunity to bring it into compliance. If not, we will move on it. The first thing is that he needs to have debris out of his yard. He has been moving on that.”

Riley said there are rotten boards and trim on the exterior of the house that need to be replaced.

“The roof needs work, and some aluminum siding on the side is bent. It needs to be repaired,” he said. “There are some openings that need to be sealed. Everything needs to conform to the 2006 Maintenance Codes.”

The council agreed to give Shabazz 60 days to have the yard cleaned up and the exterior of the house repaired. If that’s done in the allotted time period, they will allow more time to make necessary interior repairs.

“The interior will have to be gutted and cleaned out,” Riley said. “The rotten wood needs to be removed.”

Mayor Leonard Riley recommended rescinding the original abatement action and allowing for 60 days for Shabazz to make the needed improvements.

“We really don’t want to tear down a house unless we have to,” he said.

City Attorney John Ben Jones recommended having a 60-day period to clean the yard and have the exterior improvements done to the house.

“If he gets through the first phase, there’s a second phase that will need to be done. That will be the interior work, but the exterior work needs to be done first.”

The council voted unanimously to allow for more time. Shabazz thanked them for allowing him an opportunity to rehab the house.

LANETT — Jennifer Boyd can officially shorten her title by one word after being named superintendent of Lanett City Schools... read more