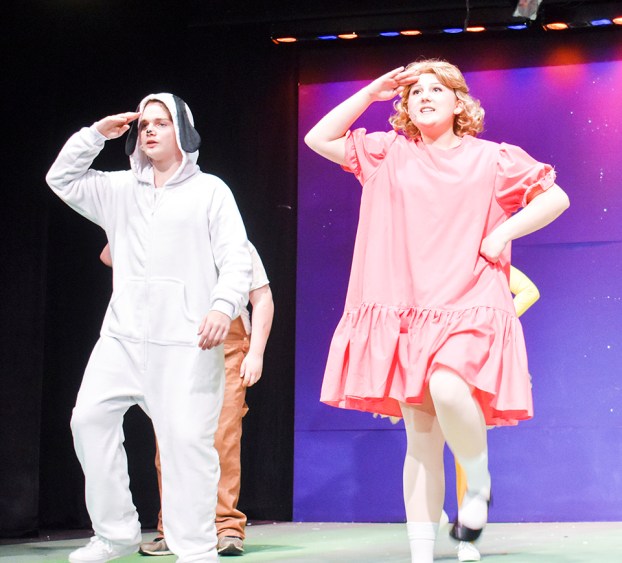 WEST POINT — This weekend the New Horizon Community Theatre will present “You’re a Good Man, Charlie Brown,” a musical based on characters in the Peanuts comic strip and TV specials.

“We get to see them as real people,” Director Anne Duraski said. “We see the different personalities Charles Schultz created in short vignettes. Charlie Brown is a big loser, Snoopy is fanciful, while pretending to be a flying ace. Sally is snarky and has lots of personality. Lucy is snarky too but she has some enduring traits and we can relate to her.”

“The play features six characters, and we made it twelve to include all the popular ones,” said Executive Director Bill Nixon.

Two of those characters are silent, Woodstock and the Little Red-Haired Girl.  The Little Red-Haired Girl is never seen in the comic strip, only talked about as the love interest of Charlie Brown.  But she was added to this production. “I wanted to make it unique,” Duraski said. “You can find jewels in the script that are not obvious but are there if you dig for them.”

Duraski was directing an opera workshop in a collegiate setting before coming on board as musical director for this fall’s Frozen Jr. with a cast of children.

“It was a quantum leap,” she said. “We have great singers here.  Everyone learns their part.”

She also mentioned the talents of technical director James Alsobrook who works the lights and sound.

“He’s super intuitive,” she said. “He has a good feel for it which is a great luxury.”

Choreographer Lynsay Oleson has been an actress in several productions, and this is her fourth as choreographer.

“This one is different in that you’re leading adults who are playing kids,” Oleson said. “It’s been a ton of fun.”

“It’s one of the most recognizable shows,” Golden said. “We spent lots of time studying the original characters.”

Golden has been with New Horizon since ‘Grease’ in 2008.

“This is one of the most underrated shows I’ve done,” he said.

Since it’s a show about kids, some assume it’s simple, but he said “the songs are wordy and challenging, and the vocal ranges are dramatic,” he said.

Theater is an escape for Golden.

“It’s a place to mellow out, to express yourself and be yourself,” he said. “Without this theater, I don’t know where I’d be.”

Nixon said this is a musical they’ve been wanting to do for a long time.

“Normally we do one musical a year,” he said. “This year we are doing two.”

The second will be this spring’s “Beehive,” which has a cast of only six women and features songs from Diana Ross, Tina Turner and many more 60s female singers.

“Since both were small casts, it was time to do Charlie Brown,” Nixon said.

Charlie Brown runs Thursday through Saturday, at 8 p.m. each night. On Saturday there will also be a 2 p.m. matinee. Tickets are available on the New Horizon website at nhct.org.

Rebels ranked No. 1 for first time in program history