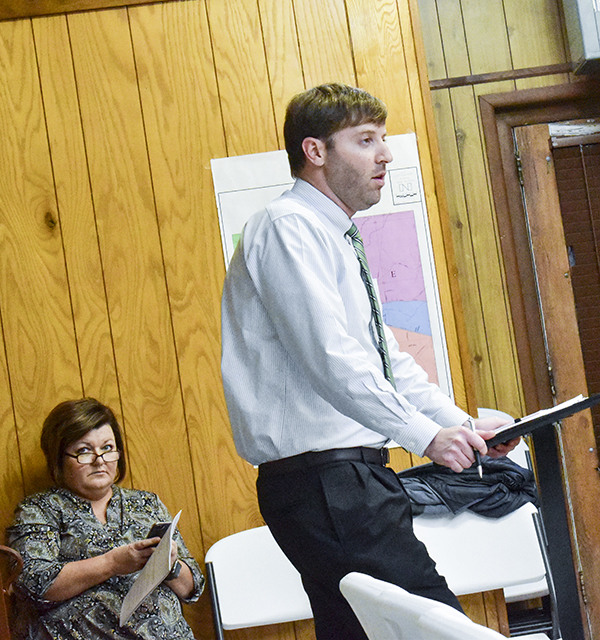 Chris Busby of the Chambers County Development Authority talks to the LaFayette City Council about options after Kardoes Rubber Company announced its closure in October. — Photo by Dustin Duncan

LaFAYETTE — Chris Busby of the Chambers County Development Authority approached the LaFayette City Council Monday night to discuss what projects the council would like to see the organization attempt to recruit.

Council members threw out ideas of a hotel, small retail shop and even a Waffle House was mentioned due to the traffic on Highway 431 and Highway 50.

However, the conversation eventually turned to a potential sales tax increase, which would bring much-needed revenue into the city.

LaFayette Councilman Michael Ellis said he’s been in favor of a 1-cent sales tax increase since he’s been on the council. He said Lanett and Valley are already sitting at 10 percent while LaFayette sits at 9 percent.

“We need that extra money for the projects we talk about like paving the roads,” Ellis said.

He said several people regularly stop at the Joe Louis statue outside of the Chambers County Courthouse to take photos, and if there were a place for them to stop and spend money, it would benefit the city more if the sales tax was higher.

The city of LaFayette has already been in talks with the Main Street Alabama program to become a full member, which would give the city intimate access to economic development professionals about how to grow its downtown.

LaFayette would also have access to educational resources and host special events with the Main Street Alabama namesake.

Busby assured the council that any potential move with a sales tax increase would not impact recruitment.

“Alabama has the lowest property taxes in the country,” he said. “That’s the biggest tax break in the industry, so a sales tax increase will not hurt us in any way as far as recruiting.”

Ellis said most people would be on board with a sales tax as long as the government does what it says it will do with the extra revenue.

Busby said Monday he would like to have regular meetings with the city council about recruitment ideas and what the council would like to see in the city.