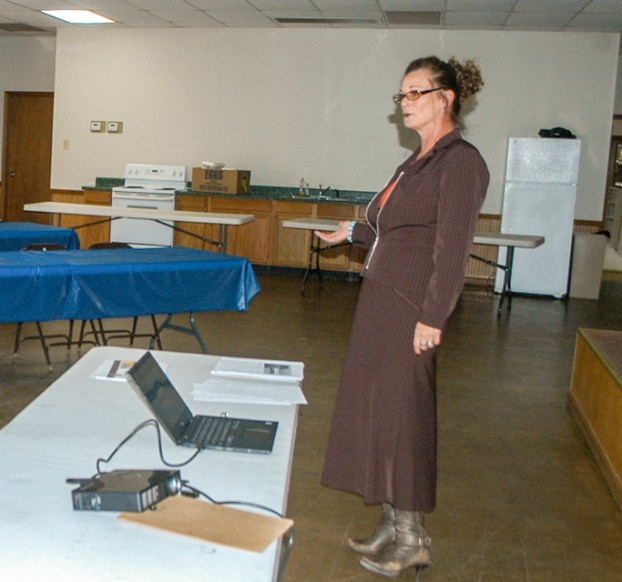 LaFAYETTE — The Greater Valley Area Chamber of Commerce on Tuesday hosted a State of Local Education Lunch ‘N’ Learn program at the ALFA Building in LaFayette.

Hodge heads a system with about 3,500 students from pre-K through 12th grade. The system operates on an annual budget of an estimated $42 million. There are 460 employees in the system’s 11 schools and central office.

“Pre-K is very important to us,” Hodge said. “We have eight classes, and the number of students served as doubled in the last three years.”

The program is funded by the state, federal and local levels.

Hodge said that Chambers County and Lanett have a great partnership going on.

“Our students can take part in JROTC and their students can go to Career Tech,” she said. “Career Tech is very popular right now. We have more than 600 kids going there every day. Especially popular is Greenpower, remote control and electrathon racing.”

Chambers County CTC has an agriculture program that’s growing in popularity and a graphic arts program that students are taking to.

“Our graphic arts students are so creative,” Hodge said. “They not only designed a movie poster, but they also wrote the script, videoed a movie and promoted it.”

Hodge said the Special Olympics was one of her favorite activities of the year.

“We are fortunate to host it at Valley Community Center,” she said. “If you come and watch it, it will make your heart grow.”

Community support is critical for any school system.

“We simply couldn’t do what we do as a school system without our partnerships,” Hodge said. “They are so helpful to us.”

She cited free back-to-school haircuts for LaFayette students as an example.

“The dual enrollment programs we have with Southern Union are important,” Hodge said. “The student expos they host are good for our students as well.”

Owen is in his second year with Chambers Academy after previous stops at Springwood and Beulah High. He described Chambers as something of a melting pot with students from multiple counties. The vast majority of the students at Chambers Academy are from the LaFayette are with 126. A total of 19 students are from Beulah, 12 from Lanett, 12 from Opelika, 11 from Valley, nine from Camp Hill, seven from Five Points, seven from Dadeville, six from Jackson’s Gap, six from Wadley, four from Auburn, three from LaGrange and one from West Point.

“We try to serve our kids and get them to where they need to be,” he said. “Our mission is to provide our students with an exceptional education in a Christian environment, including experiences that prepare them for a journey of lifelong learning.

There are 42 students in the CA Beta Club, eleven of them were recently inducted. Earlier this year, 21 seniors graduated.

“Every one of them was accepted by a college,” Owen said. “The class earned over $1.3 million in scholarships.”

He said the school starts every day with prayer and encourages its students to do it.

“The students post Bible verses, and teachers witness to them about it. In September, we had a See You at the Pole event that drew 150 people, many of them parents and grandparents of our students,” Owen said.

He said that Chambers Academy students have a wide variety of extracurricular activities to take part in such as sports, theater, and a robotics team.

“I believe that the more your children are involved in school, the more likely it is they will go on to success in life,” Owen said.

They school’s beloved librarian, Athea Richardson, died this past year. An effort is underway to remember her with a courtyard area dedicated to her efforts to promote Accelerated Reading.

“We have a lot of aesthetic improvements at the school,” Owen said. “There’s new carpeting and painting. The gym is now air conditioned and we have Apple TVs as a learning tool for students.”

Owen said he was proud of the way the students responded to community needs.

“We were one of the top three schools for fundraising for the Hike/Bike/Run last year,” he said. “They helped with tornado relief in Beauregard. We will have a float once again in the Christmas parade.”

Owen said he was looking forward to doing something special in downtown LaFayette.

“We have been gifted the old Martin Theater,” he said. “We have a grant from the Alabama Historical Commission to help us revitalize the building. We have a committee working on this right now. “