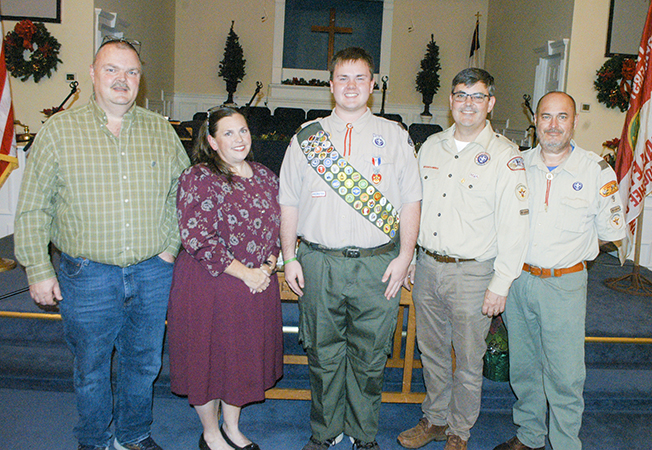 LANETT — Jacob Daughtrey went beyond what was required of him to attain the rank of Eagle Scout.

The Scout must earn at least 21 merit badges. Jacob has 47 of them.

The Eagle candidate must complete an Eagle Scout project. His project has been nominated for the district project of the year.

Jacob officially attained the rank of Eagle in a Court of Honor ceremony Sunday afternoon at Plant City Baptist Church. A large crowd was present inside the sanctuary for the ceremony. Included was a host of Scout officials, Eagle Scouts and family members.

“An Eagle Scout must live up to a higher set of expectations,” said Joel Finlay, retired Scoutmaster of Troop 9003 in West Point. “It’s something you will have throughout your life.”

Jacob presented his parents, Alfred and Gayle Daughtrey, with mother and father pins and recognized Finlay, Tamalita Autry and Carol Fulcomer as his mentors.

Paul Crowder, Scoutmaster of Troop 9009, said there’s a limited number of footprints on the moon but that most of them had been left there by former Eagle Scouts who later became U.S. astronauts.

Howard Johnson, retired advisor to Venturing Crew 315 in Cataula, Georgia, presented Jacob his Eagle Scout patch, telling him he could wear it either on his Boy Scout or his Venturing uniform.

A highlight of the program was Jacob opening an envelope he’d sealed ten years ago when he was an eight-year-old Cub Scout. At that time, he was asked to write his thoughts on what he’d like to experience in scouting. He was working on the Bear badge at the time.

“I hope to have lots of fun as a Cub Scout, Boy Scout and Venturing,” he wrote, obviously planning to complete the entire program.

Turning to his parents and Scoutmasters Finley and Paul Crowder, Jacob thanked them for all they’d done for him to have this special day.

He entitled his project “Garden Beds and Blooms.” It’s located on the grounds of Valley Park Manor and was done in memory of the late Jim Presher of Timeless Antiques, where Jacob has worked.

Garden Beds and Blooms is an elaborate project, including two garden beds, one of which is handicap accessible, a tool shed, a potting table, two benches with trellises, an octagon-shaped bench, 30 roses bushes and different kinds of flowers in the beds.

Jacob thanked those who had helped him bring the project to fruition. The Eagle Scout candidate can receive assistance from others but must have an original idea, have a plan for it, organize the work that needs to be done, acquire the necessary materials and organize the job from start to finish.