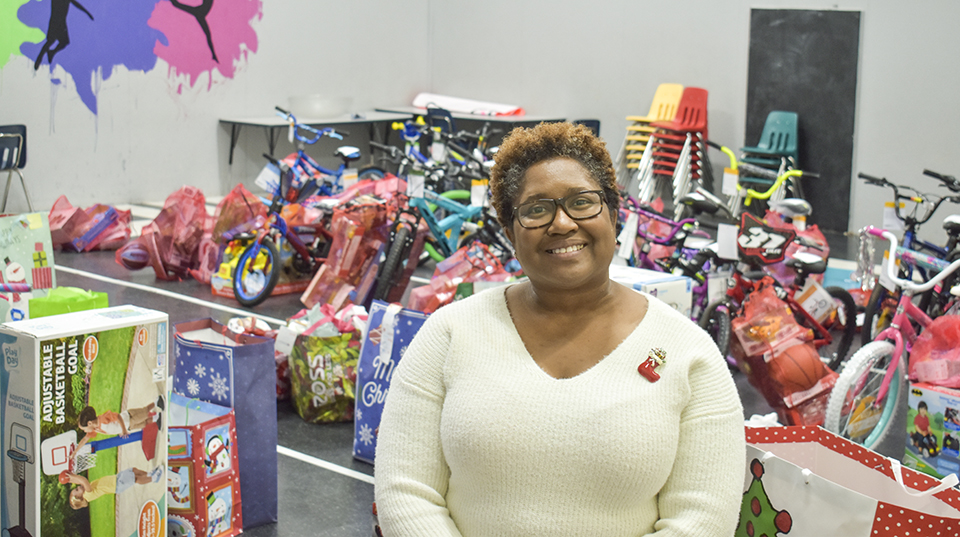 Monica Barber, West Point community development specialist, stands in front of several presents that will be haneded out Monday morning to parents at the youth recreation center in West Point.

WEST POINT — The Salvation Army Angel Tree Program, in conjunction with the city of West Point, will provide several families with presents they may not have had.

According to Monica Barber, West Point community development specialist, more than 60 families will pick up Christmas presents for children Monday morning in West Point due to the generosity of residents, organizations and city leaders.

The Salvation Army and the city of West Point began to take names at the end of October for the program. Barber said the parents must meet certain income qualifications. Once a family qualifies, a child can be “adopted” by somebody in the community to purchase presents.

Those adopting the parents purchase several presents based on a form filled out by the families tailored to the child’s interests.

Also, helping the process are the Friends of the City of West Point. They raised money to purchase several bicycles for children. If the adopted parents bought one or two gifts, the organization provided a few more from the Salvation Army warehouse in LaGrange.

This year, Barber said there were no children who weren’t adopted. However, if there were, the Salvation Army would step up and provide presents for those children.

“It is exciting to know that you are helping children,” Barber said. “Especially children that may come from low-income children to have a happy Christmas.”

She said this program is special to her because so many entities come together to make it happen. She said the city, West Point Fire Department, Power Train, Friends of the City of West Point, the Salvation Army and those who “adopted” children, all were involved in making the holidays special for these families.

“That is the joy of West Point at Christmas,” Barber said. “We all get together and do something because we want to make sure all the kids are happy.”

She said the parents are also appreciative of the support received.

“We have had parents cry and just be amazed,” Barber said. “The majority of our parents are elated because this is something they could not do.”