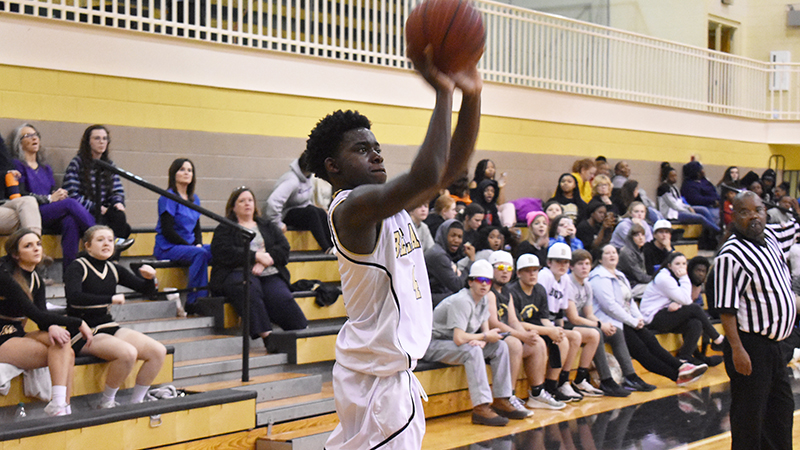 Beulah guard Sondrekius Cooper fires off a 3-point attempt in the boys loss on Thursday.-- Photo by Cody Estremera

The Beulah boys basketball team hung around with Dadeville for the first half, but it ran out of steam in the second, losing 62-43 on Thursday. With the loss, the Bobcats fall to 1-15 on the year and 1-5 in their area.

“We just ran out of gas,” Beulah head coach Curtis Noble said. “I’ve tried to use timeouts early [to sub players in and out], but that’s tough to do against the talent we faced tonight.

After allowing a couple of quick baskets, the Bobcats woke up. They were able to get inside against the much larger Tiger starting five and convert tough layups around the rim.

At the end of the first quarter, the Bobcats trailed by just three points.

Riding the momentum from the end of the first quarter, the Bobcats tied the game at 18 all with 6:35 left in the half. A minute and a half later, the Bobcats took their first lead of the game when senior guard Bailey Taylor hit a 3-point shot, giving the Bobcats a 21-20 lead.

The two teams went into the halftime break tied at 30.

“I saw grit and determination [in the first half],” Noble said. “We were working together on both ends of the court, which kept us in the ball game. We’ve come a long way this season.”

Beulah took the first lead of the second half as Taylor hit another three 30 seconds into the third quarter. After that shot went down, the Bobcats hit a wall. They were able to only score six more points in the quarter. The Tigers woke up in the second half, scoring 18 points in the quarter. Their strategy was to throw the ball inside and let their size wear the smaller Bobcats down. This trend continued into the fourth quarter, as they outscored the Bobcats by 10.

Senior guards Okhari Moore and Taylor finished with 33 of the Bobcats points, scoring 12 and 11 respectively. Junior center Austin Billingsley finished with seven points in the loss.

The Bobcats host the Valley Rams on Friday. The Rams won the first game 71-29 at Valley High School earlier this month. The first of three games starts at 4:30 CT.