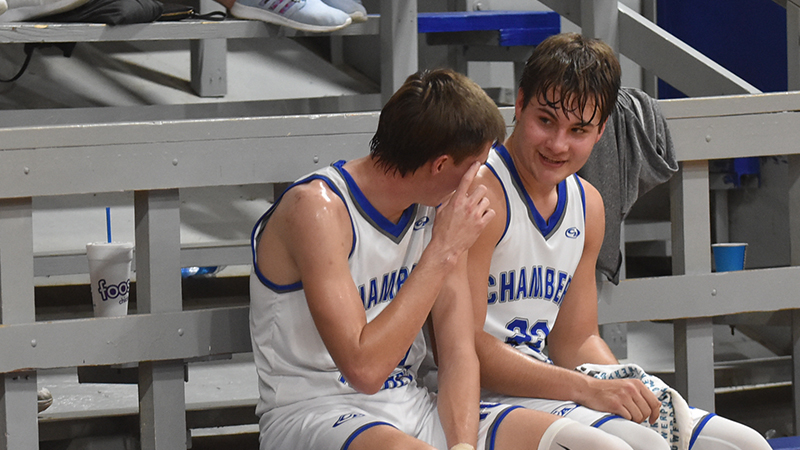 Payton Allen and Raphe Daniel chat on the bench during halftime of the Chambers-Springwood game. --File Photo

The Chambers Academy boys basketball team has proven it is one of the best teams in AISA for the last couple of years but that doesn’t mean anything for Thursday’s game, as the Rebels travel to Springwood to take on the Wildcats.

“We don’t like them and they don’t like us,” Chambers point guard Payton Allen said. “There’s definitely a good rivalry.”

The first time Allen played in the rivalry he was in the sixth grade. The Rebels only had eight players on the roster, but they were able to come away with one of their few wins of the season. He scored a season-high 14 points in that game.

“It’s a big deal anytime you can beat your rival,” Allen said.

The last time the two teams squared off was in the first round of the Chambers Academy Cystic Fibrosis tournament. The Rebels held off the Wildcats for the first half before opening the score up and winning by 18 points.

In that game, both teams struggled to shoot the ball, but Allen still managed to score more than 20 points, while the Wildcats failed to 30 points.

“We were able to really shut them down,” Chambers forward Raphe Daniel said. “We just had a great defensive game.”

Springwood’s 30 points was an oddity, as senior forward Francis Okeyia scores close to 20 points a game. He was not present for that loss, but he will play in Thursday’s game.

With a win on Thursday, the Rebels would sweep the season series on the court.

“I love to win, it’s just in me,” Daniel said. “I hate to lose. Any team that we beat, I’m happy, especially when we come to a game like this. When we go to their place, and we beat them, it fires me up inside. It’s an awesome feeling.”

In their last game, the Rebels defeated then-No. 3 Lee-Scott by seven points. The combination of Allen and Josh Holiday scored 30 of the Rebels 47.

Thursday’s game will be the first time the Wildcats have played in front of their home fans since Dec. 19 when they narrowly lost to Edgewood.