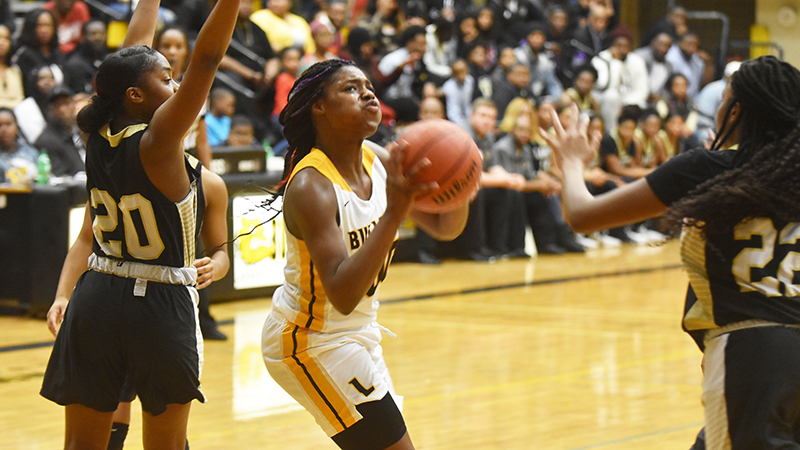 Feliah Greer drives through contact on the way to the rim.-- Photo by Cody Estremera

LaFayette— The LaFayette girls basketball team came off the opening tip slow, but caught fire in the second quarter of Friday’s game, leading to a 53-51 win against rival Lanett.

The Bulldogs entered the second quarter down six, so junior forward Feliah Greer started to go to work. The junior scored 13 of the team’s 15 points in the eight-minute quarter. She was able to deflect passes and rip balls from the Panther players, leading to fast break layups and free-throw attempts.

The Panthers were able to build leads throughout the game, building a 10-point lead by the 4:40 mark of the third quarter, but the Bulldogs just kept the course, slowly chipping away at the lead.

LaFayette was able to take a five-point lead late in the fourth quarter, which gave them the lead for the rest of the game.

The full-court pressure that the Bulldogs implement came into play throughout the second half, forcing turnovers and quick scoring opportunities.

“We preach it, we teach it, and they’re buying into what we’re showing them,” LaFayette head coach Fred Bridges said.

The pressure got even tougher for the Panthers once starting point guard Ameria Zeigler-Truitt left the game with a sprained ankle.

Juniors Ebony Williams and Greer put on a show for the Bulldogs. The two combined for 45 of the team’s 53 points. Greer led all scorers with 30, while Williams scored 15, nine of which from beyond the arc.

“[Williams] played extremely hard on both sides of the floor,” Bridges said. “She made some big shots.”

Williams, who came off the bench, proved that she was a leader all night long.

In practice, Bridges has been working on getting the team’s mindset more dialed in when they are tired. To do so, he lines his team up to shoot free throws after running. The shooter takes a breath before walking to the line.

Williams had a moment in the game where she pulled a teammate back to practice this technique.

“It shows the team is actually buying into my system and my philosophy,” Bridges said.

Breanna Glaze led the Panthers in scoring with 15 points, while Jayla Higgins added 10.

The Bulldogs travel to Bullock County for their next game on Saturday, while the Panthers host Handley on Saturday.