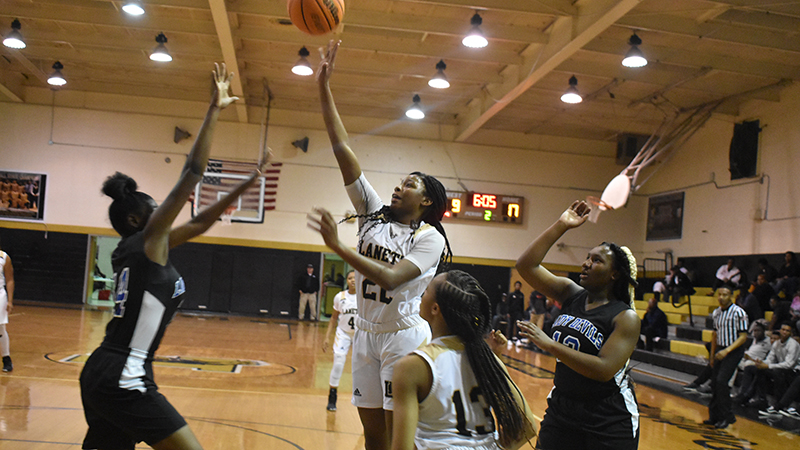 During the third quarter of its 50-33 win against Notasulga on Tuesday, the Lanett girls basketball team found itself in a fight.

The Panthers had taken a nine-point lead coming out of the half, but with one minute left in the third quarter, the lead had dropped to just three.

From that point on, the Panthers took over. They ended the quarter on a 5-0 run. They then allowed just five points in the final eight minutes of the game, winning by 17.

The Panthers came out and shot the ball well in the first quarter, as they were able to knock down a pair of threes. In the second quarter, forward Breanna Glaze took over.

The sophomore was able to space out the Blue Devils’ defense, knocking down a trio of shots from beyond the arc. She finished with all 11 Panther points in the second quarter.

“We had really good energy tonight,” Lanett head coach Charlie Williams said. “Breanna Glaze shot the crap out of the ball in the first half, and it kind of carried us a little bit.”

In the third, the Panthers struggled to find the consistency they had in the first half. The only player finding any type of success for most of the quarter was freshman point guard Ameria Zeigler-Truitt, as she scored seven of the team’s 14 points in the third.

Freshman guard Ariel Hall led the Panthers in the fourth quarter, scoring all seven of her points in the final quarter.

Lanett had struggled throughout the season on its outside shooting, but it found its stroke on Tuesday.

Since they had been playing so many games in order to catch up after football season, the Panthers had not practiced since Christmas break. Williams was able to get his team in the gym, and they were able to work on its shooting.

The Panthers hit six threes throughout the course of the game, with Glaze hitting most of the shots. She hit four of the six three-point makes, including three in the second quarter.

“My shot was going in,” Glaze said. “I also had teammates moving the ball, so I could get the ball. Without them, I wouldn’t be able to shoot.”

Glaze led the team in scoring with 18 points, while Zeigler-Truitt added 13 points.

With the win, Lanett is now second in their area, just one game back of Loachapoka.

The Panthers return to action on Friday when they host rival LaFayette.