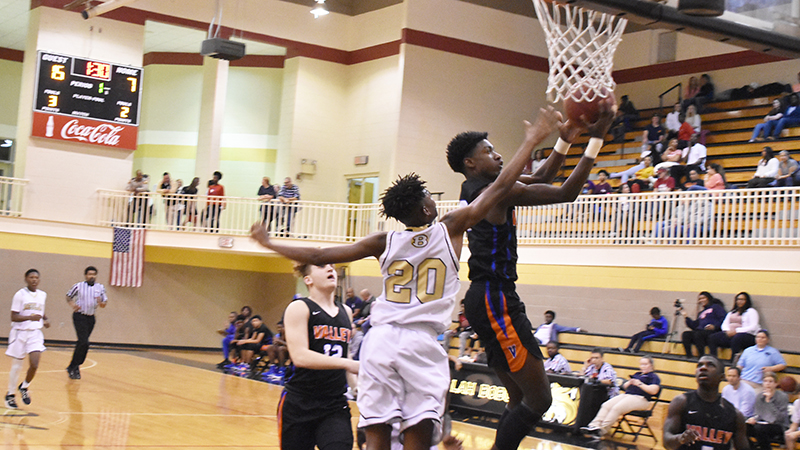 alley forward Jacquez Trammell avoids a Beulah defender on his way to the basket.

The game hadn’t even reached midway through the second quarter before the Valley boys basketball team took a double-digit lead on the road at Beulah, which turned into an 80-41 win.

The onslaught started from the tip, as junior forward Jacquez Trammell won the tip and scored on the first possession. He was able to beat his man off the dribble and get to the rim with ease, scoring seven points in the opening quarter. Forwards Amonde Floyd and Justiss Burton each contributed two layups each in the quarter.

The Rams lead was eight by the end of the first quarter. In the second, the Rams bench was the main group on the floor, as they were to play some of the JV team and an eighth-grader in the win.

“I think the future is bright,” Harper said. “They play hard. They know how to play the game. They share the ball, they can shoot the ball and rebound well. We’re trying to get a couple of them in to get them going.”

The Rams led by 15 at the half and their lead grew to 21 by the end of the third quarter.

Defensively, the Rams shut the Bobcats down in the final eight minutes of play, as they allowed just four points. Even in the final minute, the Rams were working on forcing turnovers and converting those attempts.

Floyd finished with 13 points for the Rams, while senior guard Okhari Moore led the Bobcats with 18 points.