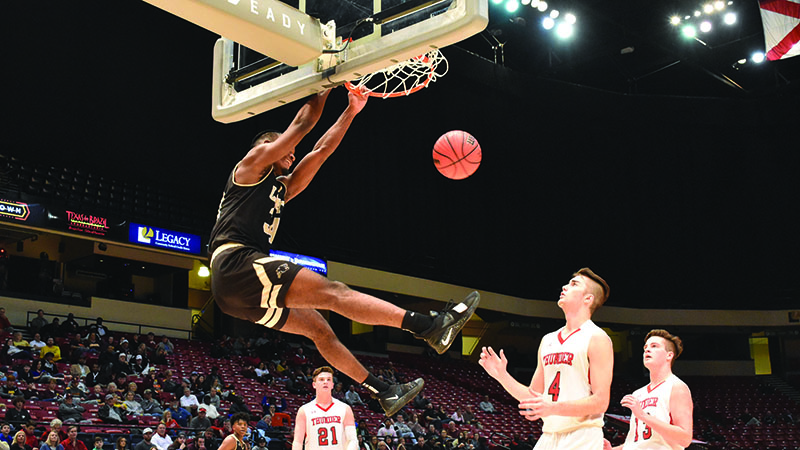 BIRMINGHAM — For the first time since the regular season ended, the Lanett boys’ basketball team was in a tight game in the 1A state semifinal game Monday against Jacksonville Christian. The Panthers had a big second-quarter run that gave them the lead for the rest of the game, winning 70-61.

“We were due for a down game. We didn’t play well today,” Lanett head coach Richard Carter said. “We missed too many free throws today.”

In the first quarter, the Panthers dominated inside, hitting 10 shots from inside the paint. The strategy was to go inside to the Boozer brothers Cameron and Zameron or penetrate with junior point guard Kintavious Dozier.

Defensively, the Panthers controlled the inside, allowing just three makes on nine attempts from inside the 3-point line. The only problem was, the Thunder were drilling shots from the outside, making four of their seven attempts in the quarter.

Lanett couldn’t answer the Thunder’s 3-point pace, missing all five of its 3-point shots in the first.

The score was tied at 20 at the end of the first quarter.

To start the second, both teams were able to find the bottom of the net. Lanett went inside with a pair of makes in the paint, while Jacksonville Christian hit a pair of 3s.

With the score 26-24 in favor of the Thunder, the Panthers started closing out on the Thunder’s shooters. After making the first two 3-point shots in the quarter, Jacksonville Christian missed its next five shots from beyond the arc.

“We just went from our 52 (zone) defense and went to our No. 5 defense, which is our straight man-to-man,” Carter said. “We didn’t do a good enough job closing out. We were there, but they were nailing them. You have to give them credit for that.”

The change in defense allowed the Panthers to force turnovers and get out in transition. Throughout the remaining 6:33 of the first half, the Panthers went on a 14-4 run, giving them an eight-point lead at the half.

After allowing a 3-point shot to start the quarter, the Panthers were able to make a pair of shots from the perimeter, as senior guard Quae Huston and Dozier knocked down a three. The two makes were the only two made shots from 3-point range all game. They were able to increase their lead to 12 in the quarter, which was their largest lead of the game.

Jacksonville Christian started the fourth by going on a 5-0 run, which included three free-throw makes. For the final six minutes of play, the game was a battle. Both teams struggled to score, but they were able to squeak out a couple of points here and there. With the lead down to four with 26 seconds left in the game, the Panthers finally put the game away with three free throws down the stretch.

Overall, free throws were a problem for the Panthers. They struggled the entire game, making just 38% (8-of-21) of their chances. Zameron Boozer finished 4-of-6 at the line, which led the team in both percentage and amount made.

The Panthers excelled on the glass. They finished the game with a 51-36 rebounding advantage. Twenty-five of their 51 rebounds were on offense.

“The rebounding advantage is always key,” Carter said. “When we issue our keys to the game, rebounding is always on top of the list. It was really big today. Our kids, especially our big kids, did a really good job today.”

The Panthers showed their ability to get offensive boards in the second quarter. With 5:03 left in the first half, Zameron Boozer collected a defensive rebound, which allowed the Panthers to push the ball down the court. Dozier missed a 3-point attempt, but Cameron Boozer collected the rebound. He missed the put back, but his brother was there to get the rebound. He missed his put back attempt, but Cameron grabbed the miss.

In the 20 seconds of gameplay, the Panthers grabbed six offensive rebounds.

In his first game in Legacy Arena, Dozier led the Panthers with 21 points. He added three assists and three steals in his 27 minutes of play.

“It’s very special for me to be here because I never thought I would be here,” Dozier said.

“I just did a good job executing when I got the ball,” Cameron Boozer said.

The Panthers will play Pickens County on Thursday at 5:45 p.m. CT. The Tornadoes defeated No. 9 Francis Marion 63-57 on Monday.

In the championship game, there will be a pair of Alabama football commits playing as Lanett’s Kristian Story will play Pickens County’s Jah-Marien Latham. Story was ranked as the No. 7 player from Alabama while Latham was the No. 8 by the 247Sports composite.