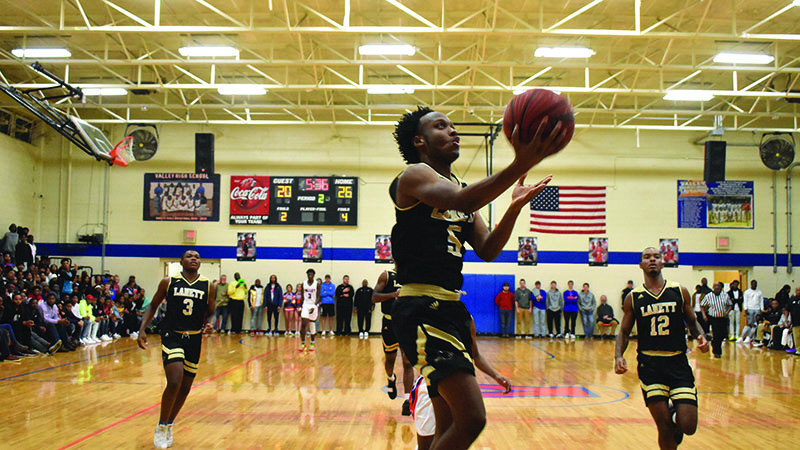 Since ending the regular season on a three-game losing streak, the Lanett boys’ basketball team has turned a corner.

The Panthers ran through their area tournament, outscoring their opponents 164-75 in the two games. In their sub-regional game, the Panthers dominated Westminster at Oak Mountain 84-36.

“I think we have a new attitude,” Lanett head coach Richard Carter said. “We’ve come in with an attitude that we’re not going to be denied. We’re playing a lot harder, and we’re practicing a lot harder. We’re doing everything we need to do in order to be a really good basketball team.”

There were two main changes in the team since the end of the regular season. The first was the return of senior starter Kristian Story.

Story, who had missed the last two weeks of the regular season with an illness, is a big player for the Panthers. Not only does he consistently score about 10 points a game, but he is also an extension of Carter and the other coaches on the floor.

“He runs the show. He sees stuff on the floor that coaches usually would have to recognize,” Carter said. “He’s got great vision. He reads defenses really well, so he knows exactly what offense we want to be in. That becomes very important when we go to a place like Garrett Coliseum, where they’re going to be way down there, and I don’t care how loud we are, they aren’t going to hear us.”

The other difference is the play of the bigs. The Panthers start the Boozer twins, and both are taller than 6-foot-8. Earlier in the year, they were more hesitant about using their size because they were worried about picking up fouls. That is not the problem anymore.

“They’re not holding back now. They’re not worried about fouls or anything like that,” Carter said. They’re just out there playing. They weren’t going out there and playing.”

The Panthers now turn their attention to the No. 10 team in 1A the Florala Wildcats. The Wildcats enter Thursdays’ regional game 22-6 with a win against Shields on Tuesday. Rashaad Coleman led the Wildcats in scoring, finishing with 32 points and 10 rebounds.

“I expect to see them press,” Carter said. “They play a motion offense. They’re not a very big team.”

Carter wants to turn the game into a “track meet.” This way the Panthers, who play up-tempo as much as possible can start to wear down the smaller Wildcats.

In previous postseasons, Carter has cut his rotation down to just eight players, but three games into the postseason, he hasn’t been forced to do so. He has been able to play his entire second group, giving his starters spurts of rest.

Florala doesn’t have that same advantage since they only play six players.

“I don’t think that’s going to be enough unless they’re in much better conditioning than I think they are,” Carter said. “When the legs get heavy, the jump shots start falling short, and that’s what we want. We want you to get heavy feet.”

Tip-off is scheduled for 8:30 p.m. EST at the Garrett Coliseum in Montgomery.