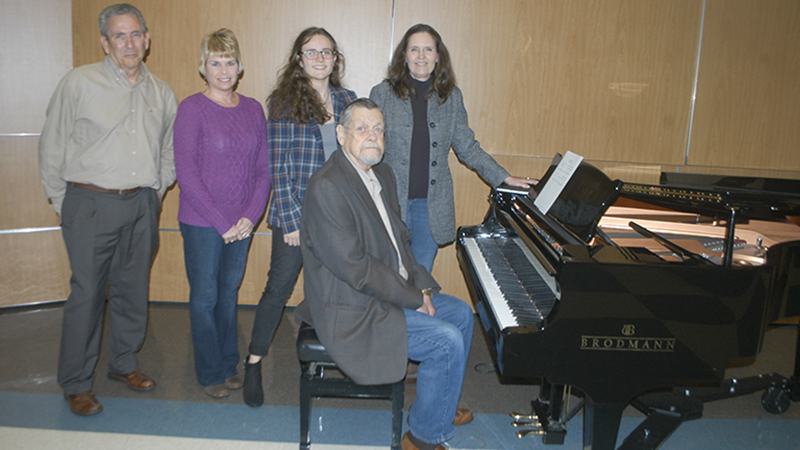 Bill Owens (seated) was accompanied by family members when the formal announcement was made Thursday afternoon that an instructional area inside the Scott Fine Arts Center had been named in his honor. -- Wayne Clark

WEST POINT — On Thursday afternoon, Point University said thank you in a unique way to a local man who has been very supportive of the school. One of the main instructional areas inside the Scott Fine Arts Center is now known as the Bill Owens Piano Lab.

A long-time Lanett resident, Owens was present with family members for the announcement.

“We are thankful for Bill Owens’ contributions to the community and to Point University,” said President Dean Collins, adding a bit lightheartedly, “It’s so encouraging to see him take on new things at an advanced age.”

Owens smiled at the comment and laughed when Collins told him he wasn’t trying to say he was getting old.

In recent years, he donated 16 pianos, purchased an acoustical piano and refurbished a grand piano for Point’s music department. He also donated some percussion equipment and two piano benches. A number of music students were there for the ceremony to personally thank Owens for the donations and to tell him that his gifts to the school had meant a great deal to their continuing to learn music.

“We could not have afforded to get all these pianos at one time,” said Professor of Music Dr. Katie Cartwright, who teaches piano and music theory at Point.

“Such donations,” said Dr. Chapel McCullough, dean of the Fine Arts Department, “allow us to purchase other equipment, to do more teaching and to put on more performances. It’s so exciting and refreshing to be in a community that loves fine arts as much as this one does. We are renovating a building (formerly Coleman Furniture) to be our band room. It will be opening within the next year.”

Cartwright said that she had known Owens for seven years and early on knew that he was a rational kind of person.

“He wanted everything to make sense,” she said. “That was the engineer training in him. I’ve enjoyed working with him and helping him make sense of the piano.”

Owens told a crowd gathered for the occasion that he had received his college education at “THE university” of Alabama. “It’s located 25 miles down the road in Auburn,” he joked.

He added that he’d lost a son a year-and-a-half ago. “My granddaughter is right here,” he said, pointing to his heart. “The people of Point University have come through like a jewel for me. I appreciate this so much, and it means so much to have my family here today.”

Afterward, Owens enjoyed refreshments in a reception area inside the Scott Center. Surrounded by family, he appeared touched as the students such as Eli Caldwell, a sophomore from Ephesus, Georgia, came by to shake his hand and personally thank him for gifting the music department.