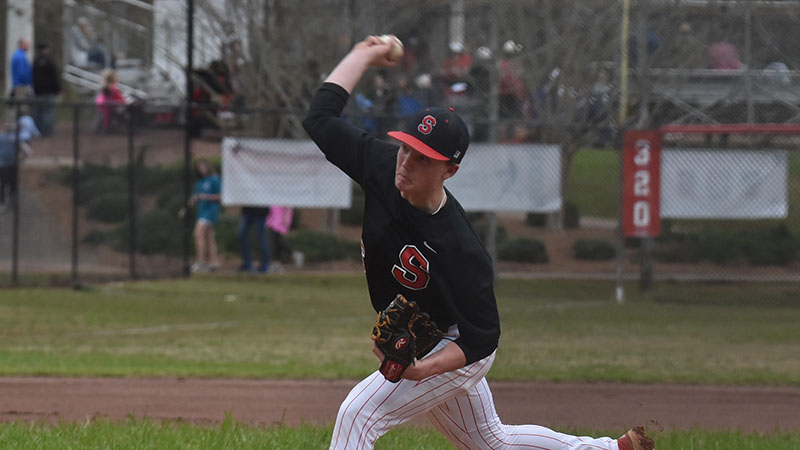 Ethan Plank throws a pitch in Springwood's loss on Tuesday.--Photo by Cody Estremera

The Springwood baseball team fell behind early and couldn’t catch back up to Glenwood, losing 14-3 on Tuesday.

Things went wrong for the Wildcats in the second inning, as the Gators loaded the bases off a pair of singles and a walk. All three runners scored before batter Garrison Mccarly was hit by a pitch. He got into scoring position by stealing a couple of bases before scoring on a groundout, scoring the fourth run of the inning.

In the top of the fourth, the Gators once again loaded the bases without any outs, drawing three consecutive walks. Mccarley doubled to left field to score two of the runners. Back-to-back doubles in the inning scored the final two runs of the top of the third, giving Glenwood an 8-0 lead.

Springwood answered in the bottom of the third, scoring three runs. After a leadoff walk and a single, Ethan Plank doubled to right field for the first Springwood run of the game. The Wildcats scored the final two runs off a sacrifice fly and a single.

The Gators scored six runs in the top of the fourth inning.

Glenwood led off the inning by reaching on a pair of errors. The second error scored a run. A pop fly scored the second run of the inning, which was followed by a double that added a run, increasing the lead to eight runs. A sacrifice fly and a double brought in the final two runs of the game.

The Wildcats struggled defensively, finishing with six errors in the game.

Plank went just two innings in the start. He allowed five hits and struck out a pair of Gators. At the plate, he finished 1-for-2 scoring a run and knocking in a runner.

The Wildcats host Flint River on Monday for their next game. First pitch is scheduled for 4 p.m.