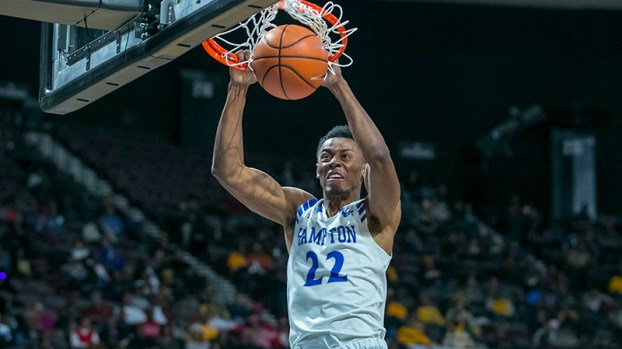 In late August, former LaFayette High School center Trevond Barnes made a dream of his a reality, as he signed a professional contract with BC Beroe, a professional basketball team in Bulgaria.

Eight days into his contract, Barnes was running a fastbreak drill during practice. He tried to euro-step around a teammate but stepped on that teammate’s foot. He heard a loud crack and went down in pain.

That crack was his ACL, MCL and meniscus all tearing.

“It was crazy because I’ve never had an injury before,” Barnes said. “All I was thinking was ‘is this it? Is it all over before it even started?’ I was just scared.”

In just eight days, Barnes’ professional career with BC Beroe was over.

After negotiating his buyout, Barnes flew back to Virginia. He had his surgery at Hampton University on Nov. 1, two months after he suffered the injury.

For the first time since he started playing basketball at 5 years old, Barnes was forced to take a break from basketball.

“It was kind of crazy,” Barnes said. “I never took time off. I felt like it was a wake-up call for me to start to have more time off for my body.”

Barnes was coming off the longest stretch of competition in his career. In his senior year as a Pirate, Barnes started 33 of the team’s 34 games, averaging 8.1 points and 5.8 rebounds while shooting 53.5% from the floor. The Pirates season ended on April 2. After the season ended, Barnes started playing in showcases, trying to get picked up by a professional team. When he graduated in May, he was still working out and still trying to get signed, which didn’t allow his body to recover after a long season.

“Having that time off was a blessing in disguise,” Barnes said. “I started working on the person I was outside of the sport.”

Alongside having his surgery at Hampton, Barnes was able to start his rehab, which normally takes about nine months to complete.

“I never rehabbed before, so it was a learning experience,” Barnes said. “The beginning was frustrating because it was so tedious, but once I started to do more agility, it started to become more fun. It’s been a roller coaster.”

While he was rehabbing, Barnes served as an unofficial graduate assistant, which allowed him to travel with the team during the 2019-20 season. In late November, the Pirates traveled to California, more specifically San Francisco.

One of the Pirate assistant coaches is godbrothers with Golden State Warrior point guard Steph Curry, so the team was able to go to a game and talk with some players after watching the Thunder squeak by the Warriors.

“It was just a great experience. I had never been to an NBA game before,” Barnes said. “Stephen Curry is probably my favorite point guard, and it was just great to see how humble he is as a person.”

Curry, who was missing time with a broken hand at the time, gave Barnes words of encouragement along his rehab process.

Right now Barnes’ goal is to be back on the court and getting in shape to try to make another run at a professional career on July 1. If the plan changes, he is looking into trying to move into coaching and start focusing on different business opportunities.

One of those business opportunities is a Youtube channel called MTTG, which stands for More to the Game.

Barnes came up with the idea to start the channel during the 10 days he was in Bulgaria after his injury. MTTG has three goals: to show athletes they have a purpose outside of athletics, provide finance and business content for athletes and a platform for unappreciated athletes.

“I’ve always been a person that tries to give back, and I thought that this was a way that I could give back,” Barnes said.

Barnes majored in finance at Hampton, so he has a background to give financial advice. The first official video that MTTG put out was a day in the life of a track athlete.

Coming out of high school, Emanuel Littles had basically done it all. He led Lanett to three consecutive state championships... read more