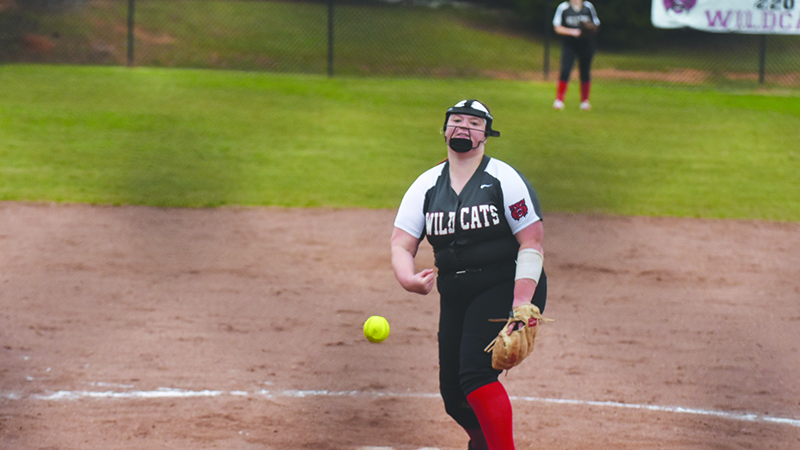 Springwood senior Miranda Butler throws a pitch in the Wildcats’ game against Glenwood. She committed to play softball at Judson College this past weekend.--File Photo

This past weekend, Springwood senior Miranda Butler announced that she would continue her education and softball career at Judson College.

“It’s a great school,” Butler said. “It’s a small school, so it’s going to be like Springwood. It’ll be smaller classes. Everyone was just really friendly when I went to visit. It seemed like it’ll be a good college to go to.”

Judson is a Baptist college and the fifth-oldest women’s college in the country. In the 2017-18 school year, Judson had 315 students enrolled in undergrad. Springwood’s current high school enrollment is 137 students, so class sizes will be about the same for Butler.

“I’ve learned better in a smaller area,” Butler said. “When I was in public school, I didn’t do as well because I was in bigger classes. Going to a smaller school will make my life easier in college.”

When making her decision, Butler looked to find the best fit for her, not really worrying about the distance from home.

“I just wanted to be in a school that I felt comfortable with,” Butler said. “Of course I’m going to miss being back home, but if I’m going to succeed there, then I think it is going to be good for me.”

Butler spent the last two years at Springwood after transferring from Valley. On the diamond, she played first base and pitched while hitting in the middle of the lineup for most games.

The Eagles were a young team in 2020, as they have only one senior and three juniors on their roster. They finished 7-9 in just 16 games in a shortened season. Their head coach, Tom Hannah, has been with the team since 2017, giving him time to mold the program into his own.

“He’s a really good coach,” Butler said. “When I met him the tryout, he was really nice, and he seems like he knows exactly how he wants things to stay when he has a certain way of doing things.”

Hannah’s style reminds Butler of all of the other coaches she’s played for in the past. His biggest compliment is that he always supports his players, never allowing them to get down on themselves.

“He helps build them up as a player, which is really big for me,” Butler said.

At the next level, Butler will be a pitcher. The Eagles had three pitchers on their 2020 roster.