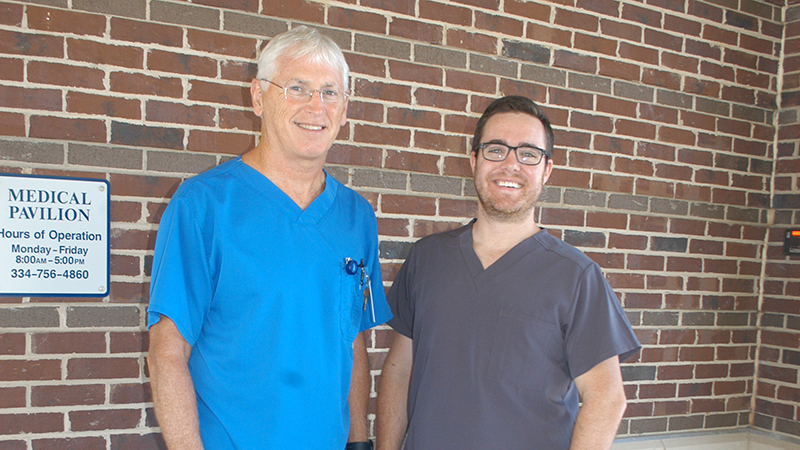 VALLEY — Due largely to retirements and young professionals moving away to greener pastures, there’s been a decline in family physicians in the local area in recent years. That number will be moving in a positive direction in early August with the arrival of Dr. Logan Hammond. He will be partnering with Dr. David Fagan at Valley Medical Pavilion on Fob James Drive.

Fagan had a big hand in recruiting him here. Luckily, Hammond is the son-in-law of his next-door neighbors, Brad and Wendy Lynn.

“My wife, Sarah, grew up in Lanett and graduated from Springwood School in 2010,” Hammond said. “She is really excited about getting back home.”

Hammond is a native of Charlotte and grew up in nearby Belmont, North Carolina. He attended Erskine College in Due West, South Carolina, where he played baseball and majored in biology. He realized early on that he wasn’t going to be a big-time pro baseball player and concentrated on his studies. After earning his undergraduate degree, he attended the Edward Via College of Osteopathic Medicine’s Carolina campus in Spartanburg, South Carolina, where he graduated in 2017.

He recently completed his residency at Riverside Regional Medical Center in Newport News, Virginia. He is board-certified in family medicine.

Fagan is delighted for Hammond to be joining him in the Physicians Offices at the Medical Pavilion.

“It’s a big boost for us,” he said. “Several years ago, we had four family physicians. That’s gone down to one.”

Fagan and Dr. Mona Bakshi are full-time family physicians practicing in the local area. That number grows to three with Dr. Hammond’s arrival on Aug. 3.

Hammond said that he’s excited to be coming to the Valley.

“This is where I would like to settle down and be active in the local community,” he said. “It’s nice for my wife to be back home. It’s my first position out of residency, which was a good experience for me. I left a better person for it.”

Hammond and his wife have two young sons, Jack Fisher Hammond, who is two years old, and Samuel Charles Hammond, who is three months old. Sarah has a degree in education but is taking time away from the classroom to raise their children. There’s two more members of the family, an Aussiedoodle named Scout and a miniature Australian shepherd named Darby.

“Dr. Hammond is going to be a good fit for our community,” Fagan said. “He did a one-month rotation with me last November, and I got to know him. I am most impressed with his knowledge and his skill level. He starts here on Monday, Aug. 3. We are booking appointments for him and trying to get the word out about him being here.”

Unfortunately, his career will begin during the COVID-19 pandemic.

“It’s going to be a challenge to start my career with this going on,” he said. “I can have video visits at first and in-person visits later.”

“It’s been working out well,” he said. “It’s almost like making house calls. The thing about video [calls] is that you don’t have to wear a mask when you’re talking to someone.”

Fagan added that he’s starting to see patients in the office.

“It’s definitely been an adjustment,” he said. “We are trying to schedule appointments while keeping the waiting room as empty as we can. It’s been a difficult period.”

There may be times when people see double when they see Hammond. He has an identical twin brother. His name is Brandon, and he’s also a doctor specializing in family medicine. He’s not far away in Auburn.