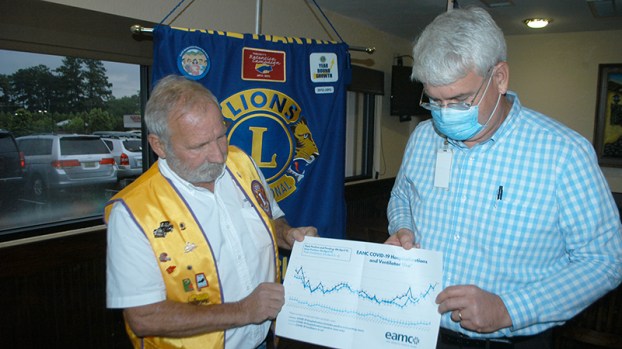 VALLEY — EAMC-Lanier Hospital Administrator Greg Nichols was the guest speaker at Monday’s meeting of the Valley Lions Club. He discussed a topic on everyone’s mind — the resurgence of COVID-19 and how it affects the local area.

“We are starting to see an increase in hospitalizations, mainly at the main campus in Opelika,” he said. “We haven’t seen this since April.”

Through Wednesday, Chambers County had a total of 647 confirmed cases and 27 deaths due to the coronavirus. The vast majority of those numbers occurred in the first few weeks of the outbreak. A total of 124 cases have been confirmed recently, Nichols said.

Neighboring Lee County, which has close to five times the population than Chambers, has higher numbers. Lee has reported 1,463 cases and 37 deaths overall and more than 500 recent cases. Overall as a state, Alabama has more than 45,000 cases and recently passed 1,000 deaths.

Nichols showed Lions Club members a chart that shows daily infections. It’s been trending upward in Chambers County since the middle of June.

“We are seeing an increase in the number of positives,” Nichols said. “On June 21, a total of 9.3 percent of the people tested were positive. It was 13 percent this past week.”

Nichols attributes the rise to a combination of doing more testing and the fact more people are getting infected.

The chart Nichols displayed showed the reported cases leveling off in late May and starting to go back up by late June.

On Monday, EAMC in Opelika had 42 COVID-positive people in the hospital. This compares to 54 in April.

“It’s creeping up again,” Nichols said, “but they don’t seem to be getting as sick as they were in April. Back then we had 22 people on ventilators. Right now we have four.”

Nichols credits experience on the part of healthcare professionals in dealing with COVID-19 for the improved numbers.

“Our doctors and nurses have a better understanding of what they are seeing now,” he said. “They are now doing great work in treating people early on and keeping them off of ventilators.”

“The rising numbers we are seeing now are a concern,” Nichols said. “People need to continue to wash their hands frequently, wear masks when around others, practice social distancing and avoid gatherings. If you cough, do it into your arm. If you are feeling sick, don’t be around other people. Stay home.”

“I even wear it at home, especially when I am around my in-laws, who are in their eighties.”

He encouraged everyone to be mindful that a very contagious, and deadly disease is out there right now and everyone should do their part in stopping its spread.

“I am concerned that people have become complacent, especially young people,” he said. “They need to be thinking about what they are doing.”

San Marcos Restaurant, where the Lions Club meets, has gotten the word about social distancing. The tables in the banquet room are spread out at distances of more than six feet. A sign at the front entrance says that groups are being limited to eight people.

Nichols said he’s excited about some coming improvements at EAMC-Lanier. The Bruce Lanier Surgical Pavilion is temporarily closed while it undergoes renovations. It will reopen as a location for outpatient surgery. Those who need inpatient surgery will be going to EAMC in Opelika.

“When our surgery area reopens, we think we will be doing more surgeries there,” he said. “We think people from the Opelika-Auburn area will be coming here for outpatient surgery. I love it that more people will be coming here and seeing what’s going on at EAMC-Lanier.”

In August, a certificate of need hearing will be taking place to determine if EAMC-Lanier should get a geriatric psych unit. Nichols is optimistic the request will be approved. This would allow elderly patients in the hospital for a short period of time while their medications are properly regulated.

“We want them back home, in assisted living or in their nursing home within two weeks,” Nichols said. “We are hoping we can get this going next year. A major benefit is that it can be done here, and people won’t have to travel.”

“It will be great to have another primary care physician here,” he said. “We are continuing to recruit good people to come here. We are trying to cut down on people having to travel out of town for medical care.”

Nichols said that healthcare professionals had learned some important lessons with the current COVID-19 pandemic.

“We were scrounging for ventilators back in April,” he said. “We had never needed a lot of them before. We have purchased some new ones, and we have more isolation rooms now. We are prepared for future pandemics. We are working on having more isolation rooms. Our doctors are more flexible in what they do now. They are more into multi-tasking.”

Nichols said he’s fortunate to be in a safe place.

“I have my temperature taken three times every day,” he said.

Much has been learned about COVID-19 since March.

“Some people, especially the young, get it and recover without showing any of the symptoms. Some people test positive even though they have no symptoms,” he said. “We have made many improvements in how we deal with this. We have bought new equipment to help with this.”

Nichols said that he can’t emphasize enough how important it is for people to wear masks.

“If I am around anyone I think is at risk, I will definitely be wearing one,” he said.

VALLEY — With Valley Haven School missing out on the Hike/Bike/Run fundraiser this year due to COVID-19, fundraising has been... read more