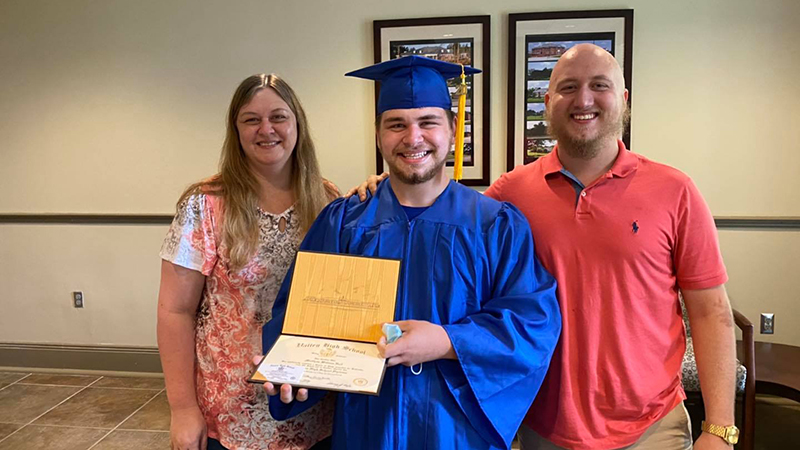 After starting with a prayer and approval of the agenda, Pomp and Circumstance started the Chambers County School District’s monthly meeting. Superintendent Dr. Kelli Hodge handed out a diploma to Matthew Hall, a Valley High School Student that graduated an entire year early.

“Not many people have that dedication to their education to just get in there,” Hodge said. “I’ve taken some of the online courses, and they’re not easy. When you don’t have that teacher with you all the time, it can be very stressful.”

Hall wanted to get through high school as soon as possible, so at the start of the 2019-20 school year, he decided to start figuring ways that would allow him to finish as fast as possible.

Valley High School allows students to take online classes and finish the school year early. Throughout the first semester, Hall and his family were thinking making the switch, so he could finish faster.

“Going online from public school is huge difference, so I had to really, really think about it,” Hall said.

At the end of the semester, Hall went to principal Dr. Sherrie Ashe and told her that he wanted to make the switch to online.

“Matthew is one of those sweet, kind and quiet students that flies under the radar. He had been flying under the radar for a while,” Ashe said. “He decided to come into the office one day and say that he wanted to do virtual. Of course, we do our normal questions, but he had his mind set.”

The transition wasn’t an easy one. Going to traditional schooling, students have a chance to walk through the lesson with the teacher and ask questions if there is something they do not understand. Hall did not have that luxury as he went through his classes by himself, receiving help more from his parents than teachers.

“It was a lot,” Hall said. “At first, I was scared and that it would take me a long time to get through all of this.”

Students that participate in the virtual learning program have to work on schoolwork a minimum of four hours a day.

At first, Hall was following the minimum amount of hours, but that process was too slow, so he started to turn it up a notch. He went from four hours to six hours, sometimes completing seven hours of work a day.

Instead of worrying about trying to work on every subject every day, he decided to start working on one subject a day, all day. The next day he would focus on a different subject.

Next, he decided to finish one subject at a time before making the switch. He started with science because that was his favorite subject.

“I would just put my time into one class because that will be quicker to finish,” Hall said. “I’ll be putting all my effort into one class every day. That will get it done faster.”

His father helped him with math because he said that was his weakest subject.

“Whenever he taught it to me, it would pop into my head and it would make more sense,” Hall said.

Hall is currently 17 and working at the County Market in Salem. When he turns 18, he plans to start working at Kia. At the County Market, workers from the Kia plant come in, and Hall will ask them different questions about their experience about Kia, which helped him decide that is where he wanted to work after high school.

“I hear a lot of great things about Kia,” Hall said.