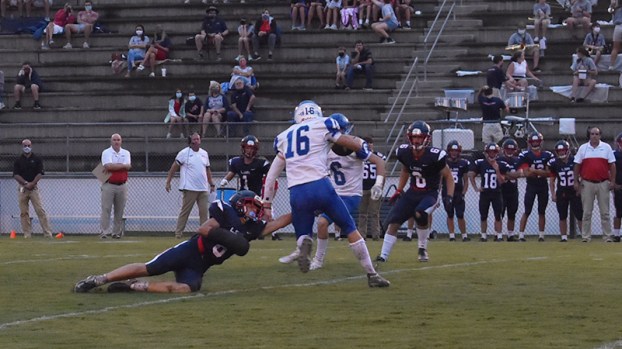 It took less than two minutes, for the Chambers Academy Rebels to score their first touchdown of the young 2020 season in their 48-7 win at Lee Scott. Most of those two minutes, the Rebels were on defense.

Lee Scott started with the ball on its own 24-yard line but only moved backward to start the game, as a penalty and a four-yard loss put the Warriors in a second and long.

On third and long, junior Kross Colley stepped up and hit the Warriors’ quarterback, who lost the ball as he was hit. Senior Jacob Oliver recovered the loose ball on the Warriors five-yard line.

Chambers score in two plays, a four-yard run by Jordan Benbrook and a one-yard run by Payton Allen.

On the Rebels third possession of the game, the Rebels went to work, steadily driving down the field combining both the run and the passing game until they reached Lee-Scott’s 23-yard line.

Lined up in the shotgun, Payton Allen sent TY Trammell in motion and handed him the ball. Trammell bounced to the right and outran the entire Warrior defense to the corner for a 23-yard touchdown, boosting the Rebels’ lead to 14 at the end of the first quarter.

On the first play of the second quarter, Lee Scott turned the ball over for the second time. Trammell recovered the fumble on the Warriors 39-yard line. On the very next play, Payton Allen lifted a pass perfectly into Trammell’s arms for a 39-yard score.

On their next possession, the Rebels once again were able to gash the Warriors’ defense through the passing game, having strikes of 27 and 11 yards before Payton Allen hit John White over the middle of the field.

White, who Jason Allen said is the fastest player on the Rebels roster, just outran the defense for a 42-yard score.

Chambers added to its lead at the end of the second quarter, as Benbrook scored his lone touchdown of the game.

To start the second half, Chambers Academy received the opening kick. The Warriors kicked it deep to the left side of the field.

Trammell caught the ball at his own 10-yard line and zig-zagged his way through the blockers and Warriors and sprinted ahead for a 90-yard touchdown.

Chambers Academy scored its final touchdown in the fourth quarter when Gavin Kight burst his way through the line for a three-yard score.

“We didn’t run the ball as much as we’ve run in the past, but they were giving us some things and we wanted to take advantage of it,”  Jason Allen said.

The Rebels dominated on defense

Payton Allen finished with 246 yards in the air with a pair of touchdowns and an interception. He added 49 yards on the ground and a touchdown. Running back Gavin Kight finished with a rushing touchdown.

Defensively, the Rebels forced three turnovers, a pair of fumbles and an interception by Jarquez Banks.

The starting defense held Lee-Scott’s offense in check while it was out there. Overall, the Rebels’ first-team defense allowed just two first downs, the first of which didn’t come until the second quarter.

“I thought we flew to the football,” Jason Allen said. “We were sound gap wise. They tried to run a lot of power and we were able to hold our ground and control the line of scrimmage. It’s a start. We have a long way to go, but I’m really proud of our guys for getting the first  win of the year.”

Chambers Academy is home against  Abbeville Christian on Aug. 28.