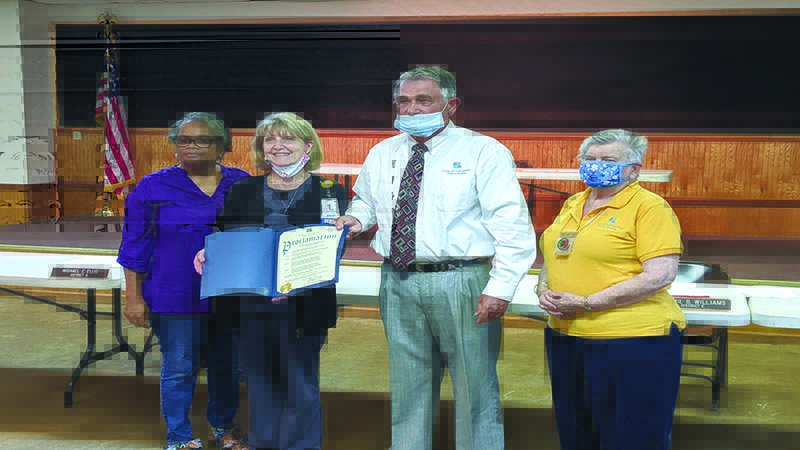 At the final LaFayette city council meeting before the Aug. 25 election, the council approved a pair of claims, announced a grant and a proclamation for the month of September and approved two resolutions.

The meeting started with Mayor Barry Moody asking for the council to approve the proclamation to make September the month of Ovarian and Gynecological Cancer Awareness Month.

“There’s a lot going on in the country at this time, but cancer is something that has touched almost everyone’s life at some point in time,” Moody said.

Linda Parker, who works for the cancer center at East Alabama Medical Center in Opelika, received the proclamation.

“I want to tell you how much this means. I’ve lived in LaFayette for 18 years, and I’m so proud to be a community member of LaFayette,” Parker said. “It is estimated that 98,000 women will be diagnosed with gynecological cancer and 30,000 will die [yearly]. It’s in honor of the survivors, but it’s also to bring awareness, and that’s what the teal bows do. They make people ask questions. Teal is the color for GYN cancers. Anything we can do, to help women realize the importance of screening. Early detection is everything.”

LaFayette Fire Chief James Doody announced that the fire department had received a grant from the Department of Homeland Security and the Federal Emergency Management Agency. The grant, which is worth $114,000, allows the department to purchase three new cardiac monitors.

“This equipment will enable our department to meet the Alabama Department of Public Health’s standards for ALS [Advanced Life Support] providers, in addition to bringing the department into compliance with the National Highway Transportation Safety Administration’s national EMS scope of practice,” Doody said. “We conducted an informal assessment of our equipment to determine where we lacked the necessary resources. LaFayette is one of three fire department-based EMS providers of the county, and we have the largest territory to cover.”

According to Doody, one-third of the emergencies the department responds to are cardiac-related. He also said that 90% of the fire department’s work is in the EMS field. The ambulances have old equipment that was still under service contract but is needing replacement.

“We are constantly playing catchup to meet the ADPH standards for ALS providers,” Doody said. “In order to provide our community best EMS care, we are in dire need of new equipment.”

The new monitors will be able to provide real-time transmission to hospitals, instead of having to rely on radio or cellphone calls to provide the necessary information.

Doody also announced the LaFayette Fire Department has been authorized to conduct training at the fire station by the Alabama Fire College.

“When I took the job, I was charged with being able to provide and involve local volunteer fire departments at our facility,” Doody said. “We have met that task and are conducting supply training at the end of this month. This class will be conducted at night from 1830 to 2100 hours [6:30 to 9 p.m.] to accommodate the working volunteer force.”

The city also approved two claims from citizens, whose clothes were ruined because of a malfunction at the water treatment facility in July. The total of the two claims was $350.

A third claim was not voted on and will be handled by the city’s insurance company.

“I do know that we have citizens that have had some damage due to problems caused by the city of LaFayette,” councilmember Tammie Williams said. “Some people didn’t even make claims. I think that we need to be accountable. Everybody needs to be held accountable, and that’s not happening now. I’m personally not going to vote to deny a claim because we’ve done so much damage to our citizens.”

The council also approved the resolution to upgrade all tier 2 employees to tier 1 employees, which deals with retirement benefits. The upgrade will cost the city roughly $22,000.