Pair of WPPD officers help out of town family 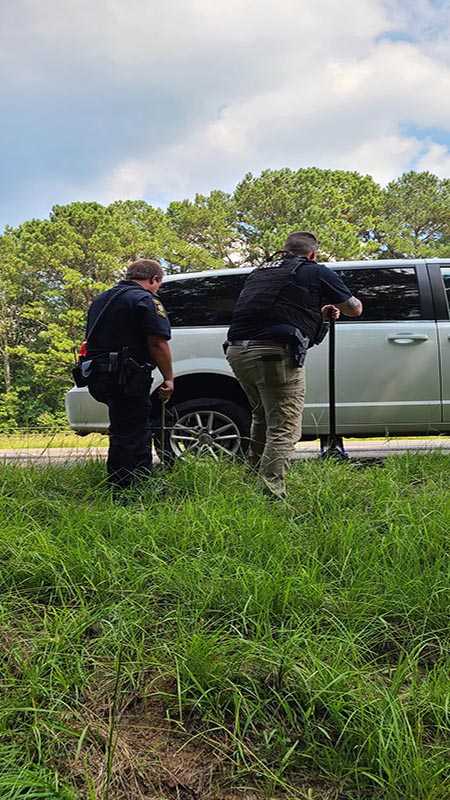 On Friday afternoon, the Fletcher family had about 45 minutes left in their trek from Delran, New Jersey. They were making the roughly 14-hour drive from the northeast to Tuskegee University, where their daughter was about to start her fall semester of college.

Around 1:30 p.m., the back right tire blew out, forcing the Fletchers off the road on Interstate 85. The car, which they had rented through Enterprise Car Rental, did not have a spare tire and needed a tow.

The Fletchers called Enterprise and were told they would send a tow truck, but the truck could not take the family with the car, and they would need to find their own way off the interstate. AAA told them the same story.

Exasperated, the Fletchers called 911 and were connected to the West Point Police Department.

Officer Brice O’steen was the first to arrive on the scene.

O’steen listened to their story and called both Enterprise and AAA to find the family’s options but was given the same information.

After talking with both companies, O’steen called officer Cain Longshore to see if he could take the family to a tire shop in LaGrange to meet the tow truck and have the tire fixed.

When Longshore arrived, the two officers and the family found out that the store would close before the tire could be fixed.

At this point, the pair of officers took action into their own hands.

“In my head, [I was thinking] these individuals are not from here, and they needed a little kindness and compassion from somebody,” Longshore said. “While we were sitting there, me and officer O’steen put our heads together and said ‘we can get the tire off, and we can go to our local tire shop to get it fixed and have it on before the tow truck would even get here.’ We ran it by the family, and they said it was a great idea.”

Longshore called West Point Tire, which is the mechanic that the department uses for their vehicle maintenance, to see if they could use a jack and bring the tire to be fixed. Bob Wilkinson, who owns West Point Tire, agreed to the officers’ request.

O’steen stayed with the family, while Longshore went to West Point Tire to get the jack.

Normally, officers are told to wait and just stay with the family, but O’steen and Longshore wanted to make sure the Fletchers could get their daughter to Tuskegee on time to move into the dorm.

“Knowing that they’re not from here and that they don’t know anyone from around here, that was going to cost them money to get a hotel and hopefully, they [Tuskegee University] would let them move in the next day,” Longshore said. “They just needed a little kindness and compassion. I told officer O’steen, if that were my mom or my dad, I would want them to be treated with the same respect. I treated them as I would my mom or dad. I figured that I would do the best that we could to get them back on the road, and that’s what we did.”

After getting the tire fixed, the Fletchers were able to get on the road and arrived at Tuskegee University at the end of checkout.

The next morning, West Point Police Chief Donald Britt received an email from Christina Fletcher telling him about the two officers’ kindness.

“They’re great guys. They went above and beyond,” Britt said. “That’s the side of police that people don’t see. Helping people isn’t always bad. I’m glad the guys were able to help them out. I reached out to the two guys and told them that they did a great job and that I appreciated that. That’s what we’re here to do, to help people.”