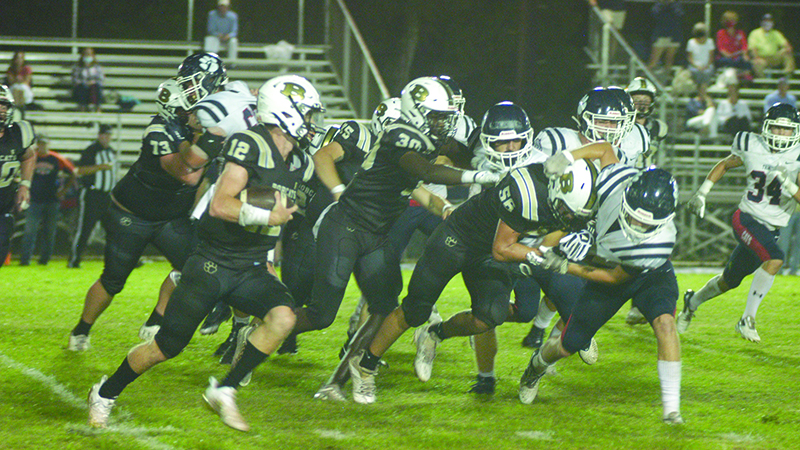 BEULAH — The 2020 football season has not been kind to the Beulah Bobcats. Due to a positive COVID-19 test, their first three games with Loachapoka, Cleburne County and Pike County were canceled.

But on Friday night, they were able to suit up and play at home against Trinity of Montgomery, one of the better teams on their schedule this year.

The visiting Wildcats are rolling along with four games under their belts.  By contrast, the Bobcats have practiced for only a week-and-a-half since the start of the season.

The contrast between a good team that has hit their stride and is playing well and a team that’s just trying to have something good happen could not have been more stark.

Trinity played well in all phases of the game to handily win by a score of 50-7.

Senior quarterback Kaleb Abney played well in defeat. He thrilled the home crowd by having an electrifying 73-yard run on the first play from scrimmage. Noah Higdon’s PAT made it 7-0 Beulah with very little time gone in the opening quarter.

It was all downhill from there.

Abney would finish the game with just under 100 yards rushing and was his team’s leading tackler with six stops. Sophomore linebacker Caleba Burton also had six tackles for Beulah.

The Bobcats failed to complete a single pass in the game and lost four fumbles.

They did manage to have 174 yards rushing.

Trinity had a balanced attack, running for 115 yards and passing for 154.  They tied the game at 7 on their opening drive. Mac McClinton scored a short run to make it 7-6, and Grayden Flowers’ extra point tied the game.

The first of Beulah’s four lost fumbles put the Wildcats ahead for good. The second play after the kickoff, the Bobcats left the ball on the ground. Trinity’s Coleman Ellis scooped it up and ran it back a short distance for a score. Flowers’ second PAT of the game made it 14-7 in favor of the Wildcats with 8:28 left in the first quarter. The Bobcats couldn’t move it on their next possession and punted on fourth-and-six from the 24.

Trinity put the ball in play on their 46 and marched 54 yards to take a two-score lead Coleman Stanley capped off the drive with a scoring run. Flowers’ third point-after kick made the score 21-7 in favor of Trinity with 4:16 left in the first quarter.

A good kickoff return by T.J. Washington gave the Bobcats good field position on their next possession, and they had one of their better drives of the night before turning the ball over on downs deep in Wildcat territory. Runs by Abney and freshman Jacori Tarver highlighted the drive.

On the first play of Trinity’s next series, quarterback John David Bonner found Jake Hufham running in the open deep in Beulah territory. He hit him with a well-thrown pass. The play advanced the ball inside the Bobcat 30. The next play got it down to the 10 and on the third play of the drive, the Bonner-to-Hufham connection put another score on the board for the visitors. A successful two-point conversion upped the score to 29-7 with 10:33 left before halftime.

Things went from bad to worse for Beulah as they fumbled the kickoff, setting up Trinity with a first-and-10 on the Bobcat 16. A pass from Bonner to William Roberson accounted for the next score. Another PAT from Flowers made the score 36-7 with 10:19 still left in a nightmarish first half for the home team.

It went to 43-7 on the next Trinity possession. Chase Letner scored on a 10-yard run to cap off a drive late in the half.

In the final minute of the first half, the Bobcats went for it on fourth and three from their 31. On a very determined run, T.J. Washington picked it up at the 35. He had another nice run to pick up a first down just before time ran out to end the half.

With the game out of hand, the officials ran the clock continuously in the second half. The Wildcats added one more score to hit the half-century mark. Beulah had the ball for only two possessions and could not dent the end zone.

The game ended with the Bobcats on the short end of a 50-7 score.

It won’t get any easier next week for Beulah. They will be on the road to take on Montgomery Catholic.